Meanwhile, those who expose the crimes of Israel are branded as “anti-Semites” in an exercise that twists that term beyond recognition into a calumny against anyone who expresses the disgust and anger felt by people all over the world, including millions of Jews, over the ongoing war crimes in Gaza. Indeed, this definition is itself anti-Semitic, identifying Jews everywhere with the criminal policies of a state that rules in the interest of a narrow Israeli financial and corporate oligarchy.

The vast gulf separating the indifference of US imperialism toward these crimes and its “horror” and invocation of “human rights” in relation to Xinjiang proves once again that all morality is class morality. The moral indignation of imperialist operatives like Blinken is activated only when it is needed to justify wars of aggression and plunder and advance the interests of the US financial oligarchy.

That the filthy banner of “human rights” previously raised to justify wars in the Balkans, the Middle East and North Africa is now being unfurled as part of the preparations for “great power” conflict with China and Russia is a measure of the extreme tensions and dangers in the global situation. 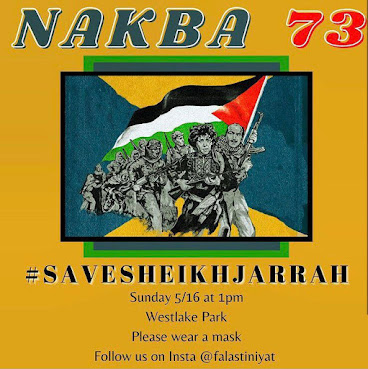 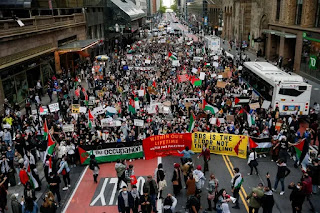 No, Uncle Sam. Palestine Has the Right to Self-Defense (Always) 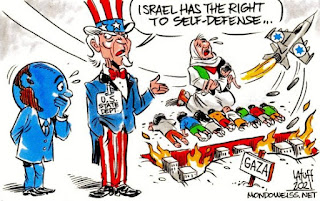 Militants had earlier fired a few rockets at southern Israel and the Jerusalem area, in a day characterized by massive violence against the Palestinians in occupied East Jerusalem.

Israel’s military announced it had beefed up its forces on its border with Gaza and was suspending a major drill to prepare for a possible escalation.

Earlier in the morning, 1,000 security forces stormed the al-Aqsa Mosque compound in East Jerusalem as worshippers were praying, firing stun grenades, tear gas and rubber bullets, while snipers took up positions on rooftops, injuring more than 330 Palestinians. More than 700 Palestinians have been injured in just a few days by Israeli security forces in Jerusalem and across the West Bank.

Police locked hundreds of worshippers inside the mosque, prevented doctors and medical teams from entering the compound and attacked and beat up those who sought to help the injured. They forced their way into the compound’s health clinic, where they sprayed pepper gas and lobbed stun grenades at those receiving treatment there.

The storming of the mosque, the third holiest site in Islam, provoked angry demonstrations around the country, including in the northern Arab city of Umm al-Fahm and the nearby Wadi Ara, as well as in Jaffa which has witnessed protests over the past week against plans to take over Palestinian-owned houses for a Jewish yeshiva.

The crackdown on Jerusalem Day—the anniversary of Israel’s illegal annexation of East Jerusalem, captured from Jordan in the 1967 War—ahead of the planned Flags March by Israel’s settler groups and far right forces through Arab neighbourhoods, was another provocation designed to precipitate a war with the Palestinians.

It was by far the most violent crackdown in the weeks of mounting tensions and bloody repression by Israel’s security forces since the start of Ramadan on April 12, amid protests against land grabs by Israeli settlers, settlement expansion, and the planned eviction of scores of Palestinians in Sheikh Jarrah, north of Jerusalem’s Old City. A factor in the explosive state of social relations has been the impact of the pandemic that has left thousands of young people without work.

The planned eviction is part of the government’s broader process of judaicising the city, making it impossible for the Palestinians to ever set up their own mini-state with some part of East Jerusalem as its capital. Far right legislators, including Religious Zionism chairman Bezalel Smotrich and Itamar Ben-Gvir of Jewish Power have led their supporters through Sheikh Jarrah, taunting the Palestinians, chanting “death to Arabs”. Smotrich called on the right-wing parties in talks with opposition leader Yair Lapid, who heads Yesh Atid and is trying to cobble together a coalition to replace Netanyahu, to halt all talks with Mansour Abbas and his United Arab List, denouncing him as a “terror” supporter.

On Thursday night, more than 100 Palestinians were wounded, with 21 needing hospitalization, after hundreds of far right Jewish Israelis marched through Jerusalem’s streets and confronted Palestinians. On Friday night, more than 200 Palestinians were injured, of whom 88 had to be taken to hospital, after several hundred riot police stormed the al-Aqsa mosque compound, provoking bloody confrontations with worshippers. There were violent clashes at Sheikh Jarrah as several hundred worshippers went to show their solidarity with residents.

On Saturday night, 80 people were injured, including a one-year-old, when clashes erupted outside the Old City, while on Sunday, 14 people had to be treated for injuries after riot police attacked Palestinians protesting the Sheikh Jarrah evictions.

There have also been demonstrations against Israel’s brutal crackdown in East Jerusalem and in support of the Sheikh Jarrah families in a number of Arab towns and villages in Israel, as well as in the port city of Haifa and the northern city of Nazareth, and in Ramallah in the occupied West Bank that were met with heavy handed repression.

These demonstrations in the last few days of mainly young Palestinians mark an unprecedented involvement of Israel’s Palestinian citizens in anti-government protests. It is a spontaneous movement, increasingly alienated from its traditional leaders—the Fatah-dominated Palestinian Authority, Hamas in Gaza and the Arab leaders in Israel.

On Sunday, flatly rejecting international condemnation of the planned evictions of Palestinians from their homes in Sheikh Jarrah, Netanyahu declared Israel “firmly rejects” pressure not to build in Jerusalem. Turning truth on its head, he proclaimed that Israel would not allow any extremist element—meaning the Palestinians—to undermine peace in Jerusalem, “We will impose law and order aggressively and responsibly. We will continue to safeguard freedom of worship for all religions but will not allow violent riots.” “I say to the terror groups: Israel will respond with force to any act of aggression from the Gaza Strip,” he added.

He refused multiple entreaties from international figures as well as his own security officials to postpone the Jerusalem Day Flags March, limit the number of participants and change the route, so as not to enter the al-Aqsa compound. He and Public Security Minister Amir Ohana insisted on letting the march go ahead without any changes to the route, with the police offering thousands of officers to escort the march. Netanyahu defended the security forces, praising their “just struggle” and commending the “steadfastness that the Israeli police and our security forces are currently displaying.”

On Monday afternoon, barely an hour before the march was due to start, the organisers announced they were calling it off telling the police they were ceding responsibility to them even as thousands of religious and ultra-nationalist youth were assembling. This came shortly after the authorities, reportedly in response to an order from Netanyahu, decided to reroute the march away from the Old City, including Damascus Gate and the Muslim Quarter, in Palestinian East Jerusalem.

It was at this time that Hamas, the Muslim Brotherhood-affiliated group that controls Gaza, which has been subject since 2007 to an illegal blockade by Israel and latterly by Egypt, issued “an ultimatum until 6pm” to Israel to withdraw its security forces from the al-Aqsa mosque compound and Sheikh Jarrah. As the ultimatum expired, the Israeli military activated sirens, the Knesset was evacuated, and the Flags March dispersed after reports of rocket fire in the Jerusalem area.

Netanyahu called for a national security cabinet meeting in preparation for increasing turmoil ahead of Eid al-Fitr that marks the end of Ramadan on Wednesday evening, May 12.

Opinion | Sheikh Jarrah and the violent brazenness of Israel’s colonialist project - The Washington Post: When will the world open its eyes to this injustice and respond appropriately?

"Our freedom struggle is not for a state but for belonging to the land, to remain on it, to keep our homes, to resist erasure." 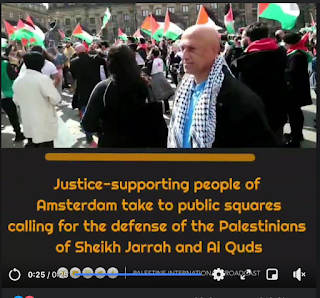 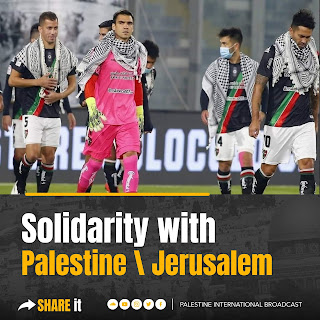 Football players of the Chilean Club Deportivo Palestino express their solidarity with the people of Jerusalem and all of Palestine by wearing the Palestinian keffiyeh.
Posted by LJansen at 8:09 AM 0 comments 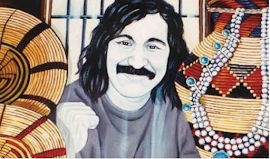 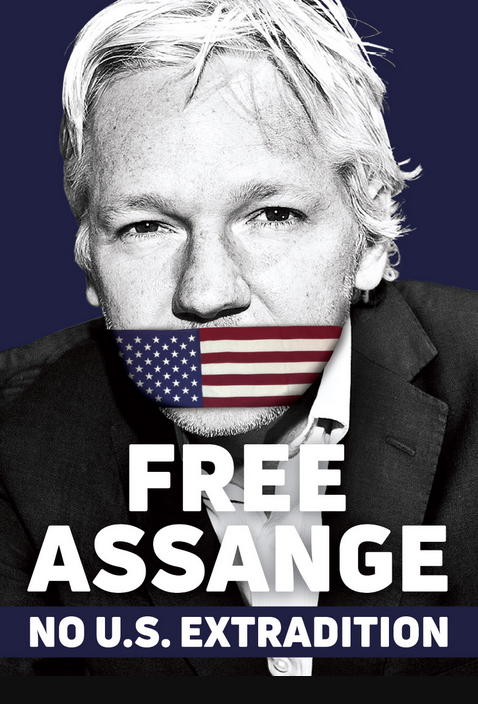