"Children in Chains" -- Trailer to Searing Documentary [ONE CORRECTION -- THE OCCUPATION IS ALMOST 70 YRS, NOT 46!] 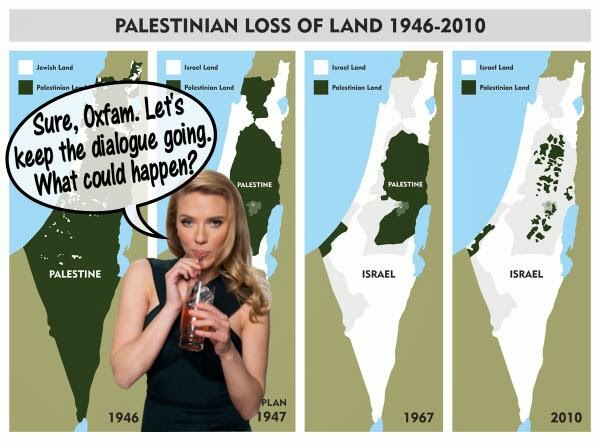 
"I flipped last night when I opened the New York Times coverage of the SodaStream/Scarlett fiasco by Robert Mackey, Scarlett Johansson’s SodaStream Endorsement Deal Conflicts With Charity Work, Aid Group Says. Not one but two of Stephanie Westbrook’s (@stephinrome) fantastic SodaStream/Scarlett graphics, (as seen here and here). We met in Gaza ’09, a beautiful and amazing person, dedicated activist, one of the best.
"We’re honored to publish her new SodaStream graphic. Thanks Stephanie!
Posted by LJansen at 8:24 AM 0 comments

G4S and Child Arrest [in Palestine], No Minor Matter!

Our New Banner and the Rasta Musician Made the Vigil Fly By on Saturday! 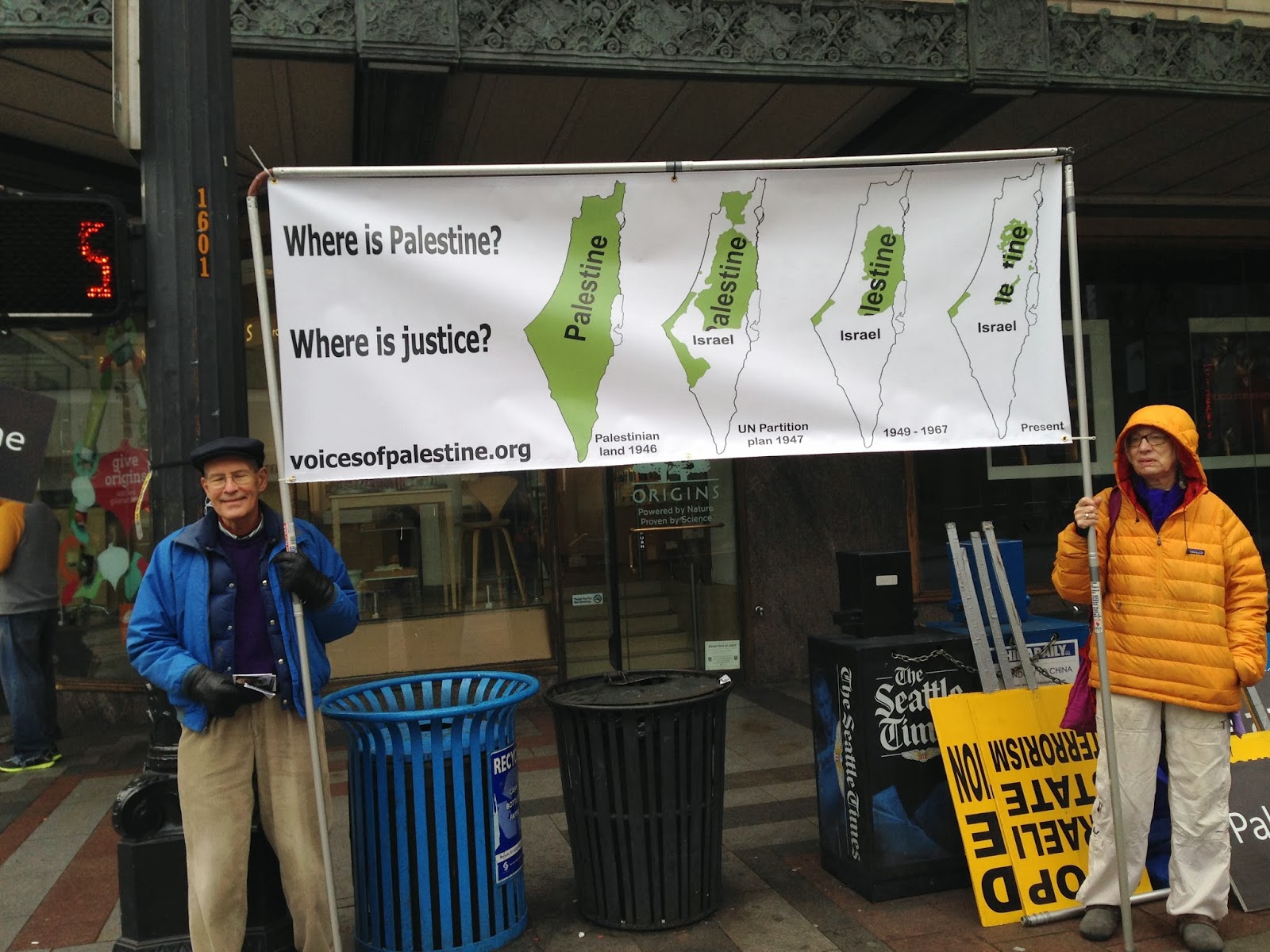 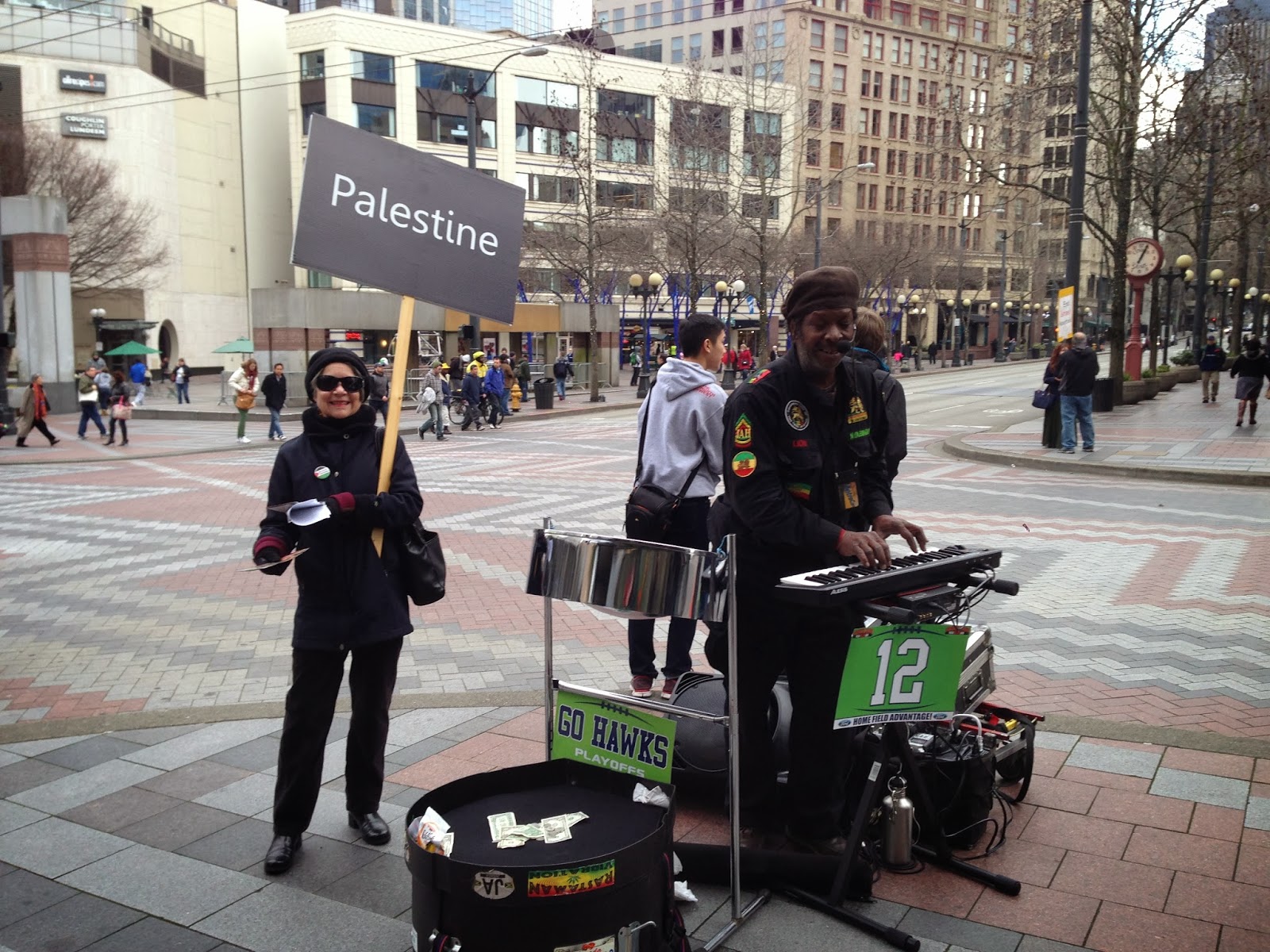 Tweet I just signed a declaration of peace!All individuals and organizations, all over the world, are invited to sign a short statement in support of ending all war, and to join in the planning of a new movement to be launched on September 21, 2014. This is the whole statement:I understand that wars and militarism make us less safe rather than protect us, that they kill, injure and traumatize adults, children and infants, severely damage the natural environment, erode civil liberties, and drain our economies, siphoning resources from life-affirming activities. I commit to engage in and support nonviolent efforts to end all war and preparations for war and to create a sustainable and just peace.To sign this, and to get involved in many different ways, individuals should click here and organizations here.To see the case against war explained clearly for anyone who has doubts, check out the website at

PHOTO: #Israel destroys wells of Tayaseer village in the occupied Jordan Valley, with help from #Volvo.
Posted by LJansen at 4:34 PM 0 comments


My brothers and sisters,
Thank you for your presence here today.
This city has made glittering fortunes for the super wealthy and for the major corporations that dominate Seattle’s landscape. At the same time, the lives of working people, the unemployed and the poor grow more difficult by the day. The cost of housing skyrockets, and education and healthcare become inaccessible.
This is not unique to Seattle. Shamefully, in this, the richest country in human history, fifty million of our people – one in six – live in poverty. Around the world, billions do not have access to clean water and basic sanitation and children die every day from malnutrition.
This is the reality of international capitalism. This is the product of the gigantic casino of speculation created by the highway robbers on Wall Street. In this system the market is God, and everything is sacrificed on the altar of profit. Capitalism has failed the 99%.
Despite recent talk of economic growth, it has only been a recovery for the richest 1%, while the rest of us are falling ever farther behind.
In our country, Democratic and Republican politicians alike primarily serve the interests of big business. A completely dysfunctional Congress DOES manage to agree on one thing – regular increases in their already bloated salaries – yet at the same time allows the federal minimum wage to stagnate and fall farther and farther behind inflation. We have the obscene spectacle of the average corporate CEO getting seven thousand dollars an hour, while the lowest-paid workers are called presumptuous in their demand for just fifteen.
To begin to change all of this, we need organized mass movements of workers and young people, relying on their own independent strength. That is how we won unions, civil rights and LGBTQ rights.
Again, throughout the length and breadth of this land, working people are mobilizing for a decent and dignified life for themselves and their children. Look at the fast food workers movement, the campaigns of Walmart workers, and the heroic activism to stop the Keystone XL pipeline!
Right here in SeaTac, we have just witnessed the tremendous and victorious campaign for fifteen dollars an hour. At the same time, in Lorain County, Ohio, twenty-four candidates ran, not as Democrats or Republicans, but as ‘Independent Labor’ and were elected to their City Councils.
I will do my utmost to represent the disenfranchised and the excluded, the poor and the oppressed – by fighting for a $15/hour minimum wage, affordable housing, and taxing the super-rich for a massive expansion of public transit and education. But my voice will be heard by those in power only if workers themselves shout their demands from the rooftops and organize en masse.
My colleagues and I in Socialist Alternative will stand shoulder to shoulder with all those who want to fight for a better world. But working people need a new political party, a mass organization of the working class, run by – and accountable to – themselves. A party that will struggle and campaign in their interest, and that will boldly advocate for alternatives to this crisis-ridden system.
Here in Seattle, political pundits are asking about me: will she compromise? Can she work with others? Of course, I will meet and discuss with representatives of the establishment. But when I do, I will bring the needs and aspirations of working-class people to every table I sit at, no matter who is seated across from me. And let me make one thing absolutely clear: There will be no backroom deals with corporations or their political servants. There will be no rotten sell-out of the people I represent.
I wear the badge of socialist with honor. To the nearly hundred thousand who voted for me, and to the hundreds of you who worked tirelessly on our campaign, I thank you. Let us continue.
The election of a socialist to the Council of a major city in the heartland of global capitalism has made waves around the world. We know because we have received messages of support from Europe, Latin America, Africa and from Asia. Those struggling for change have told us they have been inspired by our victory.
To all those prepared to resist the agenda of big business – in Seattle and nationwide – I appeal to you: get organized. Join with us in building a mass movement for economic and social justice, for democratic socialist change, whereby the resources of society can be harnessed, not for the greed of a small minority, but for the benefit of all people.
Solidarity.
Posted by LJansen at 10:57 AM 0 comments

Roadmap to Apartheid with Amin Odeh, Founder of Voices of Palestine Seattle

FILM: "ROADMAP TO APARTHEID"With AMIN ODEH, Founder of Voices of Palestine and Co-founder of the Arab American Community Coalition

In this award-winning documentary, the first-time directors take a detailed look at the apartheid analogy commonly used to describe the Israeli-Palestinian conflict.
Narrated by Alice Walker (author of The Color Purple), ROADMAP TO APARTHEID is as much a historical document of the rise and fall of apartheid in South Africa, as it is a film about why many Palestinians feel they are living in an apartheid system today, and why an increasing number of people around the world agree with them.
While not perfect, the apartheid analogy is a useful framework by which to educate people on the complex issues facing Israelis and Palestinians. Our film delves into those issues, comparing the many similar laws and tools used by both Israel and apartheid-era South Africa. The audience will see what life is like for Palestinians in the West Bank, Gaza Strip and inside Israel while gaining a deeper understanding of the conflict with the help of respected analysts on the subject. Combined with archival material and anecdotes from South Africans, the film forms a complete picture as to why the analogy is being used with increasing frequency and potency. 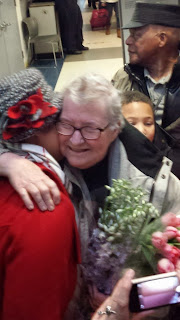