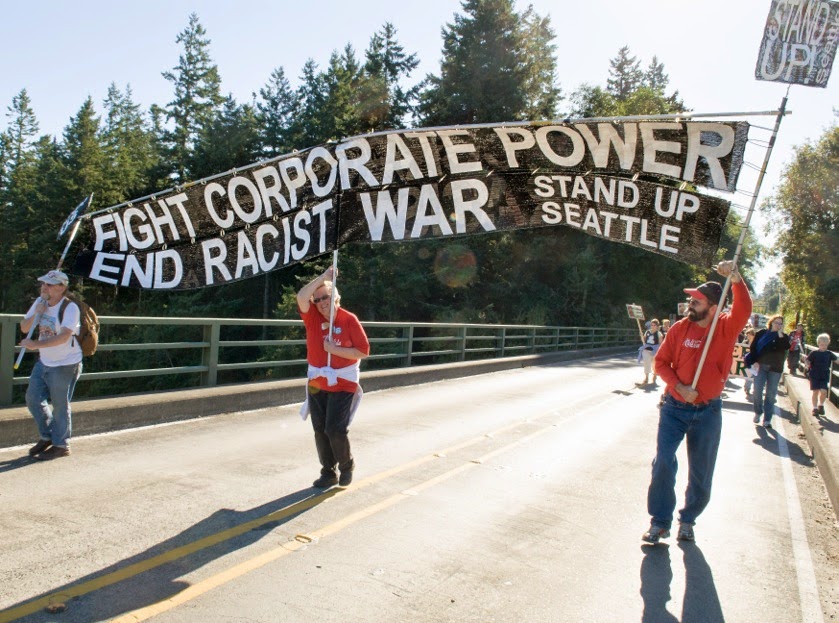 Tweet
http://smpalestine.com/2015/03/25/a-two-minute-window-into-loyola-universitys-historic-divestment-win/
The following is a two-minute speech presented at Loyola University Chicago on March 24, 2015, in support of a resolution calling on the university administration to divest from companies profiting from Israel’s occupation of the Palestinian territories.
My name is Aiman Abdelmajid and I am a senior at Loyola University Chicago studying political science. My Palestinian narrative is continuously being demonized and marginalized. My Palestinian voice is constantly being silence and buried beneath the ground but they do not know they are planting seeds. Time and time again, my Palestinian people have been given empty promises and false hope. The so called “peace process” has led to nothing but more Palestinians being killed, more Palestinian homes being demolished, more Palestinian land being confiscated in order to build more settlements, more Palestinian children incarcerated, and more olive trees being uprooted. The overall quality of Palestinian life in the West Bank and Gaza continues to deteriorate.z
Nearly a decade ago, Palestinian civil society called for a movement that would put pressure on Israel to meet the demands of the Palestinian people. Today, we ask the Loyola Student Government to consider this resolution calling for the divestment from corporations that profit off of Palestinian human rights violations. We are not asking the student government to find a solution to the conflict, but we are asking that our institution invests responsibly. By divesting from these corporations we aren’t taking sides on the conflict, we take the position of neutrality. Right now we are obviously choosing a side and we simply want our university to remain neutral on this issue rather than invest in the suffering of Palestinians in the West Bank and Gaza.
Aimnan’s speech was one of many that were presented to the Student Government in a discussion that lasted many hours. At the hearing’s close, the resolution passed with a final vote of 16-15-2.
This is the third time in two years that Loyola’s Student Government has passed this divestment resolution. It initially passed unanimously, but the opposition demanded a revote. When the resolution won a majority of the support in the revote, the Student Government’s President put his veto power to use. Many months later, the divestment campaign has only grown in support and administrators are going to have to face, sooner or later, the reality that Loyola students do not want to be complicit in one of the most egregious human rights violations of our time.
Follow Sixteen Minutes to Palestine on Twitter and Facebook for more featured content.
Posted by LJansen at 10:36 AM 0 comments

Rasmea Sentenced to 18 Months, But is Coming Home! Great News!

"Over the objections of a prosecution team that called for 5-7 years in federal prison, a harsh sentence with terrorism enhancements, Judge Gershwin Drain sentenced Rasmea Odeh, Chicago’s 67-year-old Palestinian community leader, to 18 months for Unlawful Procurement of Naturalization, of which she was convicted last November.

Almost 200 of Rasmea’s supporters filled two courtrooms in the Detroit federal courthouse, and left disappointed but not defeated.  “This is a blow, of course, but we have to remember that the government wanted the judge to lock Rasmea up for half a decade or more,” said Muhammad Sankari of the national Rasmea Defense Committee.  “Judge Drain had to weigh the outpouring of support that Rasmea has inspired from across the country. We made it impossible for the judge to justify an extended prison term, and now, we will stand with her in the fight to appeal the conviction itself, to make sure she doesn’t serve one day of that prison sentence.”

The decision came after her attorneys argued that she not be imprisoned at all.  Seventy important leaders of unions and community-based, faith-based, civil rights, and student organizations, as well as prominent academics and activists, wrote letters to the judge in the past few weeks, urging him to issue a sentence with no prison time beyond the month Rasmea served in a county jail following the November verdict.  They cited her invaluable service as a community leader in Chicago, as well as concerns for her age, poor health, and chronic Post-Traumatic Stress Disorder (PTSD).

One of the many letters of support came from Bishop Thomas J. Gumbleton of Detroit.  He wrote, “I am asking for compassion in her sentencing. Rasmea has much to offer her community…keeping her out of prison would allow her to continue as a contributing and productive person, doing the work that is so critical to hundreds of refugee women.”

For their part, prosecutors called for Judge Drain to issue a sentence far beyond standard sentencing guidelines. While prosecutors had been barred from branding her a terrorist in front of the jury last year, today they were bound by no such court orders, asking that a terrorism enhancement be added to prolong her sentence.

Frank Chapman of the Chicago Alliance Against Racist and Political Repression said, “The government showed their true colors today, making it clear this case was never about immigration, but rather, the political persecution of a Palestinian hero. What they didn’t bargain for is that Rasmea would defend herself, and that thousands would rally around her.”

During the trial last year, Rasmea was prevented from presenting evidence about the events that led to her conviction by an Israeli military tribunal 45 years ago.  Judge Drain had ruled that the circumstances of conviction by Israel didn’t matter.  “Not the illegal 1967 massacres and occupation - let alone the military ethnic cleansing of 750,000 Palestinians from the land and their homes when Palestine was partitioned in 1948 - not the midnight sweeps and kidnapping by the invading Army after the 1967 war, not the torture, not the kangaroo court and false confessions, not the prison time,” said her attorneys in filings to the court.

"Be strong whatever happens," Rasmea said before speaking to the judge, "I am strong."

After the sentencing, Rasmea was released on bond, as she sets out to appeal her conviction.  Surprising many, the prosecution did not object, despite having pressed for her bond to be revoked after the guilty verdict.  She credits the work of her supporters across the country for forcing the government’s hand.

Zena Ozeir of the Z Collective in Detroit said, “I have no doubt Rasmea’s freedom today is owed to the public outcry against her persecution. The government is still out to lock her up for years, but that is something they couldn’t win today. We have been with her at every hearing and trial date, we’ve held protests across the country, and flooded their phone lines and mail boxes, with people of conscience demanding an end to this prosecution, and an end to her unjust treatment in jail this fall.  We will not stop until we win justice for Rasmea!”

After today’s hearing, Rasmea returns to Chicago, where she will continue her important community activism and work with her attorneys on an appeal of the verdict.  If Odeh loses her case on appeal, she will have to serve the full sentence, and then lose her citizenship and be subject to immediate removal from the United States.
Rasmea Defense Committee
justice4rasmea.org
Posted by LJansen at 11:34 AM 0 comments

Reparations Now! for the Victims of Chicago Police Department Torture!

for more info, go to ChicagoTorture.org
Posted by LJansen at 6:01 PM 0 comments

UPDATE:  they have been arrested!