On Hanging from the Blades of a Bulldozer: Al-Naem is Every Palestinian - by Ramzy Baroud

Tweet On Hanging from the Blades of a Bulldozer: Al-Naem is Every Palestinian - Palestine Chronicle:

Why should Palestinians take their punishment and accept their perpetual humiliation, besiegement, and victimhood as if they are subhumans incapable of engaging with the most basic human instincts, that of self-defense, sacrifice, and self-preservation?

Naem must have joined the Great March of Return at some point, which, at its peak, was the largest collective non-violent mobilization anywhere in the world.

Tens of thousands of besieged Gazans took part in that inspiring spectacle, starting on March 30, 2018, where they have gathered every single week facing Israeli snipers with nothing but their bare chests and resounding chants.

Yet over 300 of these protesters were killed in the first year alone. Among the thousands who were injured, hundreds of lost limbs, becoming physically disabled for life.

While Gazans continue to reel under the horrific impacts of the Israeli siege, one can only imagine the kind of inadequate medical attention these wounded men, women and children have received.

Naem is Gaza. He is every Palestinian man, woman, and child in that tragic place. He is also every Palestinian man, woman, and child standing at an Israeli military checkpoint in the West Bank, hoping to be granted entry to their jobs, schools,
hospitals or back home. Naem is every prisoner held unlawfully in
Israeli prisons, tortured and humiliated as a punishment for demanding
the most basic rights for his people.
Posted by LJansen at 3:48 PM 0 comments

Activists protested outside the Virginia jail holding whistleblower Chelsea Manning on Wednesday, as the judge in the extradition hearing for WikiLeaks co-founder Julian Assange in London rejected pleas to intervene in Assange’s treatment in Belmarsh Prison.
Posted by LJansen at 8:27 PM 0 comments

UK minister who approved Trump’s request to extradite Assange spoke at secretive US conferences with people calling for him to be “neutralized” - New Cold War: News and Analysis of the Multipolar World

Tweet UK minister who approved Trump’s request to extradite Assange spoke at secretive US conferences with people calling for him to be “neutralized” - New Cold War: News and Analysis of the Multipolar World:

The AEI has access to the highest levels of the US intelligence community. Guests at the events Javid attended included two former directors of the Central Intelligence Agency (CIA) and two sitting directors of the National Security Agency (NSA). In 2018, President Trump’s then-national security adviser H.R. McMaster spoke alongside Javid. Any discussions between the British minister and the intelligence chiefs have remained secret.

The CIA made clear that it is “working to take down” WikiLeaks after the latter published the largest-ever leak of classified CIA material in 2017. It was recently revealed that the CIA was provided with audio and video of Julian Assange’s private meetings, including privileged conversations with lawyers, in the Ecuadorian embassy by a Spanish security company. The NSA has also been extensively exposed by WikiLeaks.
Posted by LJansen at 8:36 AM 0 comments

WE ARE HERE TODAY FOR JULIAN ASSANGE.-- Roger Waters in London at Stop the Extradition of Julian Assange Event

WE ARE HERE TODAY FOR JULIAN ASSANGE.

“Over our dead fucking bodies.”

Reporters Without Borders UK Bureau Director Explains the Dangers of the...

Palestinian Prisoner Khalida Jarrar in her own Words: The Age of Freedom Will Come - Politics for the People

Tweet Palestinian Prisoner Khalida Jarrar in her own Words: The Age of Freedom Will Come - Politics for the People:

Khalida Jarrar is a Palestinian feminist, a lawyer, educator and an
elected parliamentarian. Over the years, she came to symbolize
Palestinian popular resistance in the occupied West Bank, enraging the
Israeli occupation authorities that arrested her repeatedly.


Despite her failing health, as she is suffering from multiple ischemic infarctions and hypercholesterolemia, the 57-year-old feminist leader was thrown in jail, and placed in solitary confinement on many occasions.

After her release from prison in February 2019, she was rearrested in October, and is currently held under a precarious Israeli law known as ‘administrative detention’. This law is inconsistent with international law and the most basic requirements of fair trial in democratic countries, as prisoners are incarcerated for prolonged periods, without charge or due process.


Between her release and re-arrest, Jarrar contributed a Foreword to my latest book, These Chains Will Be Broken: Palestinian Stories of Struggle and Defiance in Israeli Prisons. Expectedly, her articulated message was that of the strength of character, determination, courage, and hope.

[AT THE ABOVE LINK] are excerpts of Jarrar’s Foreword, where she urges people around the world to “carry and communicate” the stories of Palestinian prisoners so that “someday, the walls of every prison may come tumbling down, ushering in the age of Palestinian freedom.”
Posted by LJansen at 9:55 AM 0 comments

Medicare for All: Last Week Tonight with John Oliver (HBO)

Tweet Free All Political Prisoners –- Including Julian Assange and Chelsea Manning | Black Agenda Report: Julian Assange and his protégés have made common cause with Black revolutionaries in their zeal to lay bare the dictatorial nature of the omni-pervasive national security state and the sheer, racist barbarity of the U.S. imperial project.
“A huge struggle must be launched to claim the means of human expression.”
Posted by LJansen at 10:08 AM 0 comments

Tweet Released At Last: Welcome Home, Move 9 Member Chuck Africa! | PopularResistance.Org: Imprisoned since he was only 18, Charles Sims Africa was finally released from Pennsylvania's SCI Fayette on Feb. 7. The youngest and the last of the MOVE 9 to be paroled, Chuck, now 59 and recovering from cancer, was first eligible for parole in 2008 — after 30 years of incarceration.
Posted by LJansen at 8:31 AM 0 comments

Tweet Israel-Palestine issue is glaring example of how some people have rights and some people don’t - Roger Waters to RT — RT World News: Pink Floyd co-founder Roger Waters, facing a campaign to deplatform him from SXSW after a pro-Israel group got his ads pulled from Major League Baseball, told RT the accusations of antisemitism are a distraction from human rights.
Posted by LJansen at 7:30 PM 0 comments

Boeing Is Insolvent--Max and Stacy Know 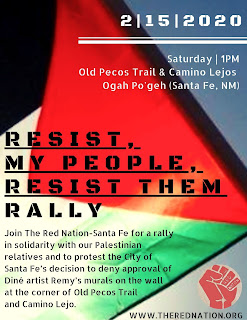 World Beyond War Has A Message 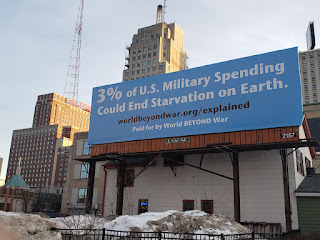 https://worldbeyondwar.org/
Posted by LJansen at 6:24 AM 0 comments


People who have visions should go see a doctor.

Yesterday U.S. President Donald Trump published a Vision for Peace, Prosperity, and a Brighter Future for Israel and the Palestinian People. The paper refers to 'vision' 28 times.


It is similar to this Lebanese 'Vision for Peace' for a brighter
future for the people in North America which foresees some split of
territory between natives and colonial settlers. 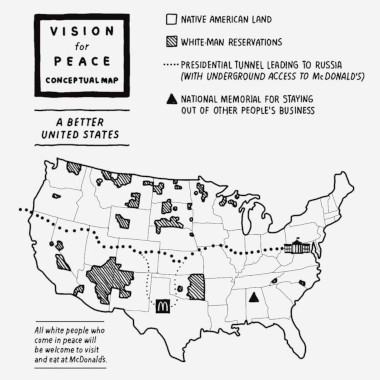 bigger
Visions do not create rights. They have no legal grounds. They do not convey legality to anything.


Trump, his Zionist donors and the U.S. media seem to have trouble
understanding that. They will be educated by those who continue to stand
up for the rights of the Palestinian people.