I'M WITH THEM UNTIL THE LAST VERSE, BUT THE REST IS MAGNIFICENT!

LYRICS:
The Left On Green Theater presents our first Christmas song. Happy holidays to all!

Stand up for Science Rally! YAY!!!

A Very Merry Un-Christmas to You! 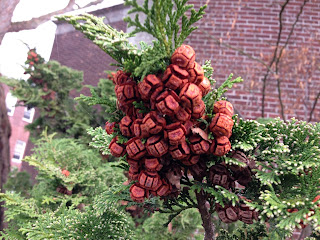 Found these while walking Daisy and Lilly this morning. 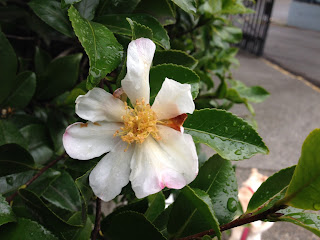 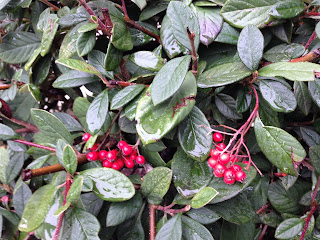 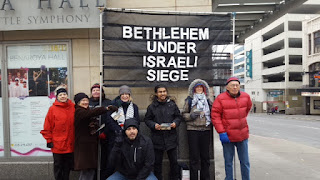 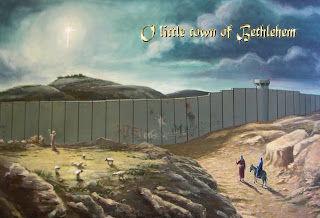 FRONT (and BACK below)
from "If Americans Knew.org" website 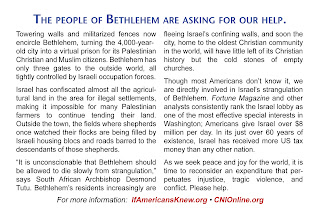 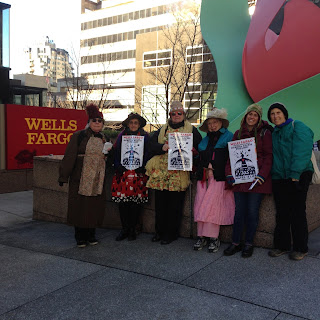 https://youtu.be/knsFEpmiSfc
Posted by LJansen at 8:30 AM 0 comments

"Noam Chomsky Explains Why Dems Are Suddenly Scared Of Putin" -- JIMMY DORE EXPLAINS THIS SO WELL.

FROM SAM SMITH'S WEBSITE (IN EXPLANATION OF THE ABOVE VIDEO):

In keeping with our efforts to provide the news while there's still time to do something about it, thirteen years ago we not only reported on the collapse of the first American Republic, we apologized for it. In short, Donald Trump is the grim result of our problems, not the cause of them."
Posted by LJansen at 8:59 PM 0 comments

"Rasmea Odeh Gets a New Trial; TELL MCQUADE TO DROP THE CHARGES NOW!!!!"


After cancelling a November 29 Daubert hearing last week, Eastern District of Michigan Federal Judge Gershwin Drain reviewed written arguments, and ruled today that Palestinian American community organizer Rasmea Odeh will be granted a new trial.
“This is incredible news,” said Nesreen Hasan, a leader of the Rasmea Defense Committee and its lead organization, the U.S. Palestinian Community Network (USPCN). “The government has gone to great lengths to cover up the details of Israel’s torture and crimes against this mentor of mine and of so many others, this Palestinian icon. Now, the truth will finally be told, in open court.  Rasmea will be vindicated.”
Last year, Rasmea was sentenced to 18 months in prison and deportation after being convicted in 2014 of Unlawful Procurement of Naturalization, a politically-motivated immigration charge, for failing to disclose on applications for U.S. citizenship that she had been arrested decades earlier in Palestine by Israeli authorities. In February 2016, the Sixth Circuit Court of Appeals sent the case back to Judge Drain, saying he had wrongfully barred the testimony of a torture expert that was critical to the defense. At the original trial, Rasmea was not allowed to tell the entire story of Israel forcing her to falsely confess to alleged bombings in 1969, when she endured over three weeks of vicious sexual, physical, and psychological torture at the hands of the Israeli military.
Rasmea suffers from Post-Traumatic Stress Disorder (PTSD) because of this torture, which, according to her clinical psychologist, Dr. Mary Fabri (who has worked with torture survivors for 25 years, and at the world-renowned Kovler Center for the Treatment of Survivors of Torture for 12), caused her to suppress the horrible recollection of the arrest when she answered questions on her immigration application. Judge Drain excluded Fabri’s testimony from the first trial, and disallowed any evidence about the rape and torture. Today’s decision clears the way for a new trial, where this testimony can finally be heard by a jury. The judge had previously mentioned January 10, 2017, as a potential new trial date, but today’s ruling does not include a specific start.
In filings before the ruling, the government argued that Judge Drain should again exclude Fabri’s testimony, asserting that Rasmea did not have PTSD, that she was feigning her symptoms, and therefore, that her memory could not have been impacted during the immigration process. Despite recently subjecting her to 17 hours of clinical mental examination to prove these theories, the government’s own expert affirmed the diagnosis of PTSD, and reported that Rasmea was not faking any symptoms.
At the new trial next year, defense attorneys are hopeful a jury that finally gets the opportunity to hear testimony about torture and PTSD, will find Rasmea not guilty.  In the meantime, the defense committee is calling on U.S. Attorney Barbara McQuade to stop wasting taxpayer money and end this travesty of justice right now–by dropping the charges now and letting Rasmea go free!
“This has been a politically-motivated case from day one,” said Frank Chapman, Field Organizer for the Chicago Alliance Against Racist and Political Repression. “The whole case against Rasmea is nothing but a pretext to intimidate those who organize and struggle to realize a liberated Palestine. She has remained determined in the face of this repression, and we will continue to stand beside her. Hundreds have come out from across the country to stand with Rasmea at every hearing, and every day of her trial and appeal. These same hundreds, and thousands more, are now demanding of McQuade, ‘Drop the Charges Now!’”
Today, we celebrate another great victory in the campaign, but we won’t stop here.
Tomorrow, Wednesday, December 7, 2016–FOR A FULL DAY, from 9 AM to 5 PM EST–please call U.S. Attorney Barbara McQuade at 313-226-9100, and demand that she stop wasting taxpayer money, that she stop persecuting a woman who has given so much to U.S. society, and that she Drop the Charges Against Rasmea Now!
In the meantime, the Rasmea Defense Committee, led by USPCN and the Committee to Stop FBI Repression, urges supporters to continue to struggle for #Justice4Rasmea by donating to the defense and organizing educational events about Rasmea and the campaign in your communities. Visitwww.justice4rasmea.org or email justice4rasmea@uspcn.org to get more involved.
Posted by LJansen at 4:37 PM 0 comments

via Censored News, http://bsnorrell.blogspot.com/2016/12/dapl-is-drilling-without-permit-dec-5.html
Posted by LJansen at 4:26 PM 0 comments

"No, Dakota Access Pipeline has NOT Been Stopped. Developer Flips Off Easement Denial." -- @SaneProgressive

#PalestinianLivesMatter -- The Empire Files: "Inside the Hotbeds of Israeli Settler Terror"

VIA @CRYSTAL1JOHNSON
Posted by LJansen at 6:34 PM 0 comments


Oceti Sakowin, ND – On Sunday afternoon, Chairman Dave Archambault II of the Standing Rock Sioux Tribe announced that he had been informed the U.S. Army Corps of Engineers had denied the easement permit necessary for the Dakota Access Pipeline to go under the Missouri River.
An atmosphere of celebration quickly erupted at the Oceti Sakowin camp when the news was announced:


The decision was confirmed shortly later in a statement issued on the Army’s website:

“The Department of the Army will not approve an easement that would allow the proposed Dakota Access Pipeline to cross under Lake Oahe in North Dakota, the Army’s Assistant Secretary for Civil Works announced today.

Jo-Ellen Darcy said she based her decision on a need to explore alternate routes for the Dakota Access Pipeline crossing. Her office had announced on November 14, 2016 that it was delaying the decision on the easement to allow for discussions with the Standing Rock Sioux Tribe, whose reservation lies 0.5 miles south of the proposed crossing. Tribal officials have expressed repeated concerns over the risk that a pipeline rupture or spill could pose to its water supply and treaty rights.

“Although we have had continuing discussion and exchanges of new information with the Standing Rock Sioux and Dakota Access, it’s clear that there’s more work to do,” Darcy said. “The best way to complete that work responsibly and expeditiously is to explore alternate routes for the pipeline crossing.” Darcy said that the consideration of alternative routes would be best accomplished through an Environmental Impact Statement with full public input and analysis.” – US Army Statement

Lori Kearns is the health policy advisor to Senator Bernie Sanders (I-Vermont).
She’s been making the rounds in recent weeks telling single payer supporters that Senator Sanders will not introduce his single payer bill into the Senate next year.
Why not?
Because party unity is more important than single payer.
Sanders apparently believes that single payer will get in the way of electing a Democratic Senate in 2018.
Wouldn’t want to confront Democratic Senate candidates with the deaths of their constituents due to Obamacare, would you?
One reason why Sanders soared during the primary was his constant refrain that we need to cover every American with a single payer health care system.
This resonated with the American people, with polls showing that three-fifths of Americans — including a majority of those who want Obamacare repealed, and even 41 percent of Republicans — favoring a “federally funded healthcare program providing insurance for all Americans.”
Translate — single payer.
Everybody in. Nobody out.
If Sanders believes it, where is the bill?
Why won’t Sanders re-introduce it in the upcoming session?
Because he is now in the Democratic leadership in the Senate — handpicked by Wall Street favorite incoming Senate Minority Leader Charles Schumer (D-New York.)
And if the Democrats say no, Sanders says no.
Call it death by Democrat.
And death by Obamacare.
Narrow networks.
High deductibles and co-pays.
Skyrocketing premiums.
Twenty nine million Americans still uninsured.
And more than 28,000 preventable deaths a year due to lack of health insurance.
All under Obamacare.
And Sanders won’t introduce his single payer bill because the Democrats tell him not to?
During the battle over Obamacare on the Hill in 2009, I asked Sanders why he was supporting Obamacare when he stood for single payer.
Sanders was a student of the difference — Obamacare controlled by the health insurance companies and written by their lobbyists — single payer a public system that cuts the health insurance companies out of the game.
Sanders looked at me, snarled, told me not to lecture him and walked away.
Goodbye single payer. Hello Chuck Schumer.
Posted by LJansen at 7:22 AM 0 comments 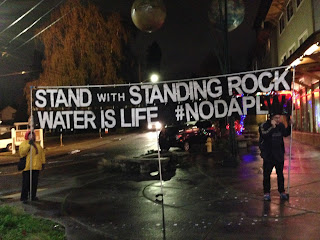 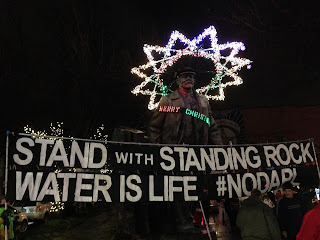 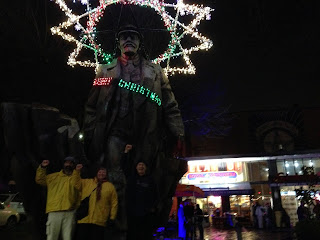 Seattle Activity for #NoDAPL at Standing Rock Heating Up!! #StandwithStandingRock 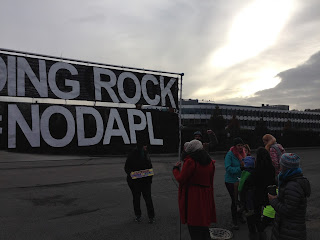 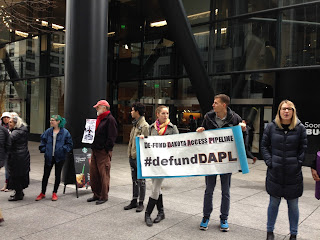