https://youtu.be/AEdIEf-5ulI
Posted by LJansen at 9:38 AM 0 comments

Chris Hedges - The American Empire Will Collapse Within a Decade, Two at Most (11-19-18)--[Which Will Go First? Climate or Empire?]

found on PatrickTBrown.org
Posted by LJansen at 11:47 AM 0 comments

Don't Be Lost in the World--Join #ExtinctionRebellion

Extinction Rebellion
Posted by LJansen at 8:17 AM 0 comments

Greta's Strong Speech Last Day of the Climate Change School Strike – I will continue and urge you to do the same!

ExtinctionRebellion
Posted by LJansen at 8:00 AM 0 comments 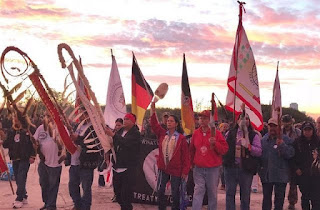 "The annual gathering pays tribute to the original residents of Alcatraz Island and the coalition of Indigenous activists who occupied it from 1969 to 1971."

The popular mythology of Thanksgiving, which the United States celebrates tomorrow (November 22), Whitewashes the Wampanoag people’s bravery and ignores their descendants’ ongoing fight against cultural genocide. Many Indigenous people opt out of this historical erasure by traveling to Alcatraz Island for the Indigenous People’s Sunrise Ceremony on Thanksgiving.


See Guachichil Resistance's other Tweets
Twitter Ads info and privacy
The San Francisco Chronicle reports that the event, known to some as “Unthanksgiving Day,” commemorates a pivotal event in 20th century Indigenous activism: the occupation of the former penal island by Richard Oakes and a coalition of Indigenous activists from November 1969 to June 1971. The action, whose participants operated under the banner Indians of All Tribes, took place at a time of heightened Native American activism via the American Indian Movement, whose leaders Dennis Banks and Russell Means also participated in the occupation. Dr. Dean Chavers wrote for Indian Country Today that this takeover led to major policy wins for Native Americans.
San Francisco media outlet KALW notes that the ceremony includes speeches, rituals and honorific dances that pay tribute to the occupiers and recognize the oppression Indigenous tribes have faced. It has been held on the island, which was originally inhabited by the ancestors of the Muwekma Ohlone tribe, since 1975.
According to a Facebook event listing from co-organizer International Indian Treaty Council, those who cannot attend may participate in the proceedings via local radio station 94.1 KPFA and its website.
In the meantime, watch this video from the 2010 ceremony:

The Indigenous People’s Sunrise Ceremony is not the only Indigenous event marking the trauma of genocide on Thanksgiving. The United American Indians of New England will host the National Day of Mourning in Plymouth, Massachusetts—the site of the original Thanksgiving.
Posted by LJansen at 7:53 AM 0 comments

FACEBOOK PAGE:  https://www.facebook.com/XRSeattle/
Posted by LJansen at 9:25 AM 0 comments


IF YOU'RE IN SEATTLE TOMORROW
(NOV. 17),
JOIN US IN SOLIDARITY WITH THE
EXTINCTION REBELLION EVENT IN LONDON

How Trump's Racist Campaigning Serves 'Rule by the Rich'--@therealnews MUST WATCH!

#ExtinctionRebellion Seattle Crew Out at Wallingford--October 31, 2018 (The Beginning) 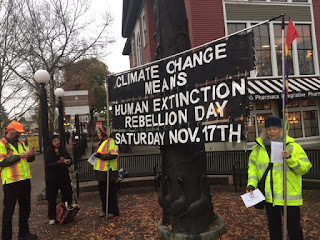 JOIN THE #EXTINCTIONREBELLION!  SAVE YOUR LIFE BY STOPPING CLIMATE CHANGE!
Posted by LJansen at 11:47 AM 2 comments

JOIN THE #EXTINCTIONREBELLION.  STOP CLIMATE CHANGE!
Posted by LJansen at 11:16 AM 0 comments