Many Countries at UN Oppose Trump Interference in Venezuela

Extinction Rebellion Seattle at the Center of the Universe Singing Their Hearts Out to Save the Planet! 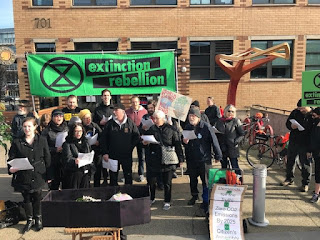 The ‘Extinction Rebellion’ Wants You to Wake Up 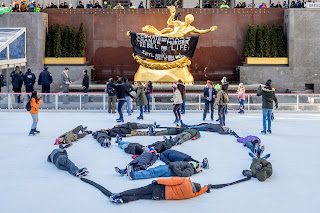 EXCERPT:
The Extinction Rebellion (or XR) is a grassroots direct action movement that kicked off in the UK in October 2018, gaining international attention and the backing of people like Naomi Klein, Noam Chomsky and Bill McKibben after thousands of protesters shut down five London bridges in a highly publicized act of civil disobedience. Since then, over 200 Extinction Rebellion outposts have emerged around the world. The IPCC report’s findings have spurred less legally-risky action, as well: the “Green New Deal” championed by the Sunrise Movement and Rep. Alexandria Ocasio-Cortez has become a must-endorse policy for progressive Democrats, tens of thousands of students inspired by 16-year-old activist Greta Thunberg have walked out of classrooms in Germany, Belgium, Switzerland, Australia and elsewhere over the past few weeks to protest climate inaction and 70,000 people marched in Brussels on Sunday.


Utilizing strictly nonviolent tactics and operating within a largely decentralized structure, the Extinction Rebellion has three ambitious demands: to push governments to communicate the truth of the ecological crisis to the public, to reduce carbon emissions to net zero by 2025 and to allow the formation of a democratic “citizens assembly” to oversee the massive changes this would necessitate. The New York City chapter of XR also includes a demand for climate justice, or “a just transition that prioritizes the most vulnerable people and indigenous sovereignty.”


On Saturday, the sun was out but the air was frigid, and attendees, ranging from small children to septuagenarians, bounced and clapped and danced to stay warm. This, along with the bright neon colors and the singing and the camaraderie, gave the event a surreally festive air, considering the subject matter. But looking the worst-case scenario in the eye — and doing something about it, no matter how herculean — seems to provide a certain amount of existential relief.
Posted by LJansen at 4:54 PM 0 comments 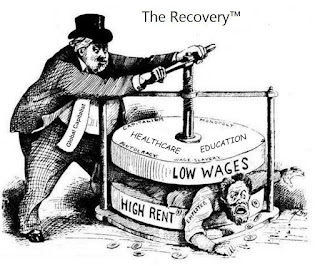 Tweet
https://www.thestar.com/vancouver/2019/01/07/calm-before-the-storm-as-wetsuweten-nation-members-await-rcmp.html
for pictures and more on this outrage, click on link above.
EXCERPT:
MORICE RIVER, B. C.—Armed police clad in camouflage made arrests Monday afternoon upon breaching two checkpoints erected by Wet’suwet’en nation members, who have been trying to stop the LNG company Coastal GasLink from entering their traditional territories in northern British Columbia.
After an intense standoff with police around 2:30 p.m. local time, police breached the barrier at one of the checkpoints, set up by the Gidimt’en clan of the Wet’suwet’en nation.
“What are your grandchildren going to think?” yelled nation members as police advanced.
Officers removed two protesters who had bound themselves to a fence, and a number of people were arrested in the raid. Other members of the Wet’suwet’en escaped the chaos, retreating to a second checkpoint farther up the Morice West forestry service road, about 44 kilometres outside the town of Houston.
Coastal GasLink is developing a pipeline through the area to deliver natural gas to the proposed LNG Canada facility in Kitimat, B.C. Coastal GasLink is a subsidiary of TransCanada PipeLines Ltd.