Tweet Sorry for the poor pics.  But anyway, I got to shake his hand.

In the workshop, he reminded us that while everyone has been hurt by the recession, people of color (starting out from a disadvantaged position due to already existing institutional racism) have only been shoved further down the wealth scale.  The fight for 15 must involve ALL of us! 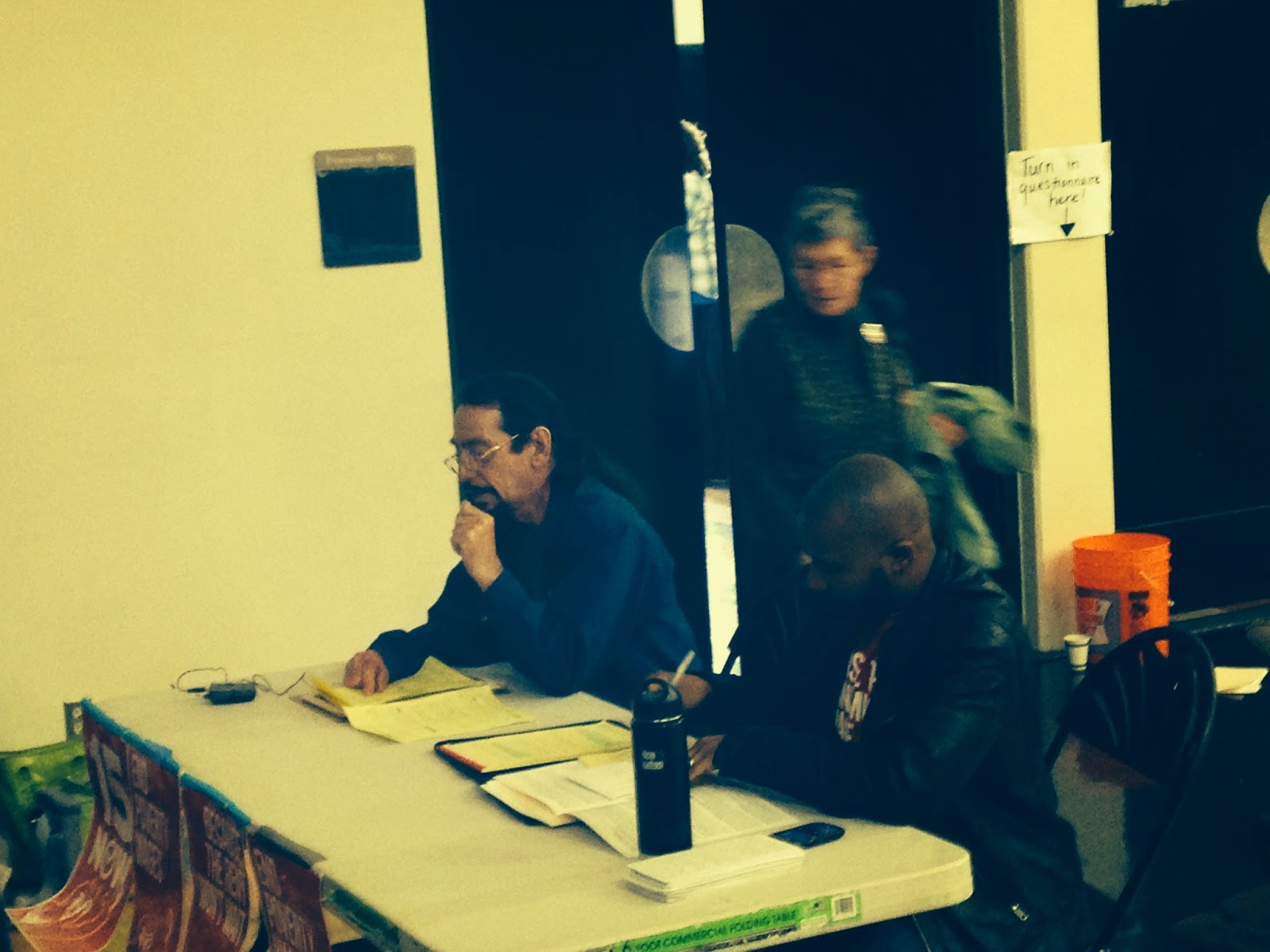 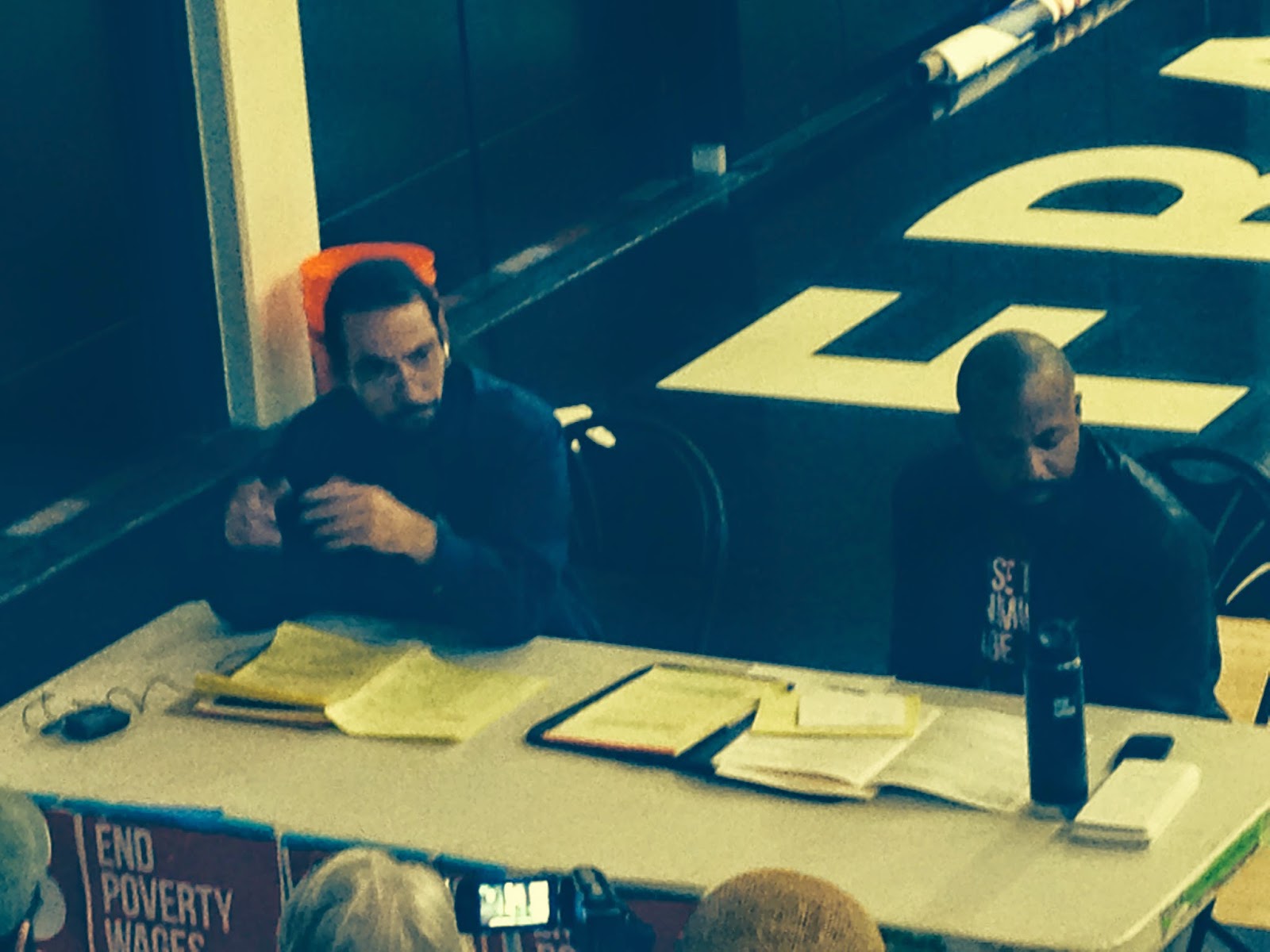 And here is Glen's excellent report about the conference on The Real News Report:

Make it a habit as I do to check in with The Black Agenda Report, where Glen is Executive Editor.

It was no longer about gaining access and opportunity in a morally bankrupt system, but rather about a radical transformation of society.

A few weeks after the Riverside speech, King challenged the SCLC to pressure Congress to pass an Economic Bill of Rights – a $30 billion anti-poverty program that included a commitment to full employment, a guaranteed annual income and the construction of 500,000 low-income housing units. King’s stated goal with this feat was to move from an integrationist-reformist disposition to a revolutionary position. It was no longer about gaining access and opportunity in a morally bankrupt system, but rather about a radical transformation of society. A transformation was desperately needed to cool the embers flamed by social misery and police violence. King’s personal democratic socialist theology was, now, on full display. Divested of the need to secure white “moderate” support and abstaining from President Johnson’s political maneuvers, King sought to highlight the plight of the nation’s poor. On June 25, 1967, King preached at Victory Baptist Church in Los Angeles. “We aren’t merely struggling to integrate a lunch counter now,” he said. “We’re struggling to get some money to be able to buy a hamburger or a steak when we get to the counter,” King boomed from the pulpit. According to King’s theology, access to the right to vote was not enough to achieve black liberation inside the beloved community. July 1967 proved to be especially hot. Riotous rebellions took place in Newark and Detroit.

“Mass civil disobedience can use rage as a constructive and creative force.”

While fully acknowledging the realities that produce black rage, King was still committed to nonviolence. He proposed a mass act of resistance that would not only dramatize multi-racial suffering of the poor, but would also bring the city to a grinding halt until its legislative occupants addressed poverty. “To dislocate the functioning of a city without destroying it can be more effective than a riot because it can be longer-lasting, costly to society but not wantonly destructive,” King wrote. Civil disobedience would not contain black rage, but direct it at the source of black affliction – the federal government. “Mass civil disobedience can use rage as a constructive and creative force,” King pledged. Acknowledging that black people should be enraged, The Poor People’s Campaign would not “suppress rage but vent it constructively and use its energy peacefully but forcefully to cripple the operations of an oppressive society.” The Poor People’s Campaign would harness the rage of the poor into an act of mass civil disobedience by shutting the city down. This was dangerous political terrain. The civil rights movement, heretofore, depended upon federal intervention. The Poor People’s Campaign broke with that pattern and made the federal government the target. King and his staff met with Native American, poor whites’, and Chicano leaders to get endorsements and to mobilize their constituencies. The Poor People’s Campaign could have brought a great cloud of poor witnesses together who would have brought the city to halt.
King was slain standing in solidarity with poor black janitors in Memphis and the Poor People’s Campaign did not achieve its stated goals. And King’s prophetic warning concerning spiritual death has come to pass. In the past decade, the triplets of evil are embodied in correlating events: Hurricane Katrina (racism), the Iraq War (militarism), and the fiscal crash of 2008 (materialism). To make matters worse,Citizens United and the recent Supreme Court decision striking down limits to campaign contributions may be the last gasp of the American empire, signaling the trump of materialism over democracy. The onslaught of reproductive rights restrictions and anti-queer legislation combined with aggressive voter rights violations has taken the body politic off life support.

The United States may have a black president, but the black poor still do not belong.

The United States may have a black president, but the black poor still do not belong. In some urban centers, upwards of 50 percent of black and brown men are unemployed. It seems every other week there is a Trayvon Martin, CeCe McDonald, Renisha McBride or Jordan Davis – victims of state-sanctioned violence against black bodies. The UN recently issued a reportcondemning the United States for a racist prison industrial complex and racist policing (racism); illegal drone strikes, extrajudicial assassinations, indefinite detention, torture, and NSA surveillance (militarism) and criminalization of homeless (materialism). In the “Kids Count” Report, the Annie E. Casey Foundationindicated that African American, Latino, and Native American children lag in every early childhood indicator.
King warned the US of democracy’s pending doom here. King’s mission was to “redeem the soul of America.” The black freedom struggle, in part, accentuated redemptive possibilities – but the United States may prove beyond redemption. The triplets render the Statue of Liberty blind and mute. Like its greatest son, the body politic lays it head on its cooling board and the flag is its winding cloth. In the wake of King’s death, his beloved Coretta mourned: “He gave his life for the poor of the world, the garbage workers of Memphis and the peasants of Vietnam. The day that Negro people and others in bondage are truly free, on the day want is abolished, on the day wars are no more, on that day I know my husband will rest in a long-deserved peace.” To be sure, King is turning over in his grave.
Posted by LJansen at 10:47 AM 0 comments

Tweet
[We'll be setting up at 11:00 if you want to come early and help; or just come join us during the day sometime.]

Join us to remember the Nakba (Arabic for “catastrophe”) of 1948, when over 700,000 Palestinians were driven out of historic Palestine and over 400 Palestinian villages were destroyed; and to remember the ongoing Nakba as Palestinians continue to be attacked, besieged, and driven out of homes by the State of israel.
Sponsored by Palestine Solidarity Committee, Voices for Palestine, and Seattle Mideast Awareness Campaign, the Nakba remembrance will include PALESTINE: STOLEN HOMELAND, a display of more than 100 white tents inscribed with the names of over 400 of the destroyed villages from 1948. 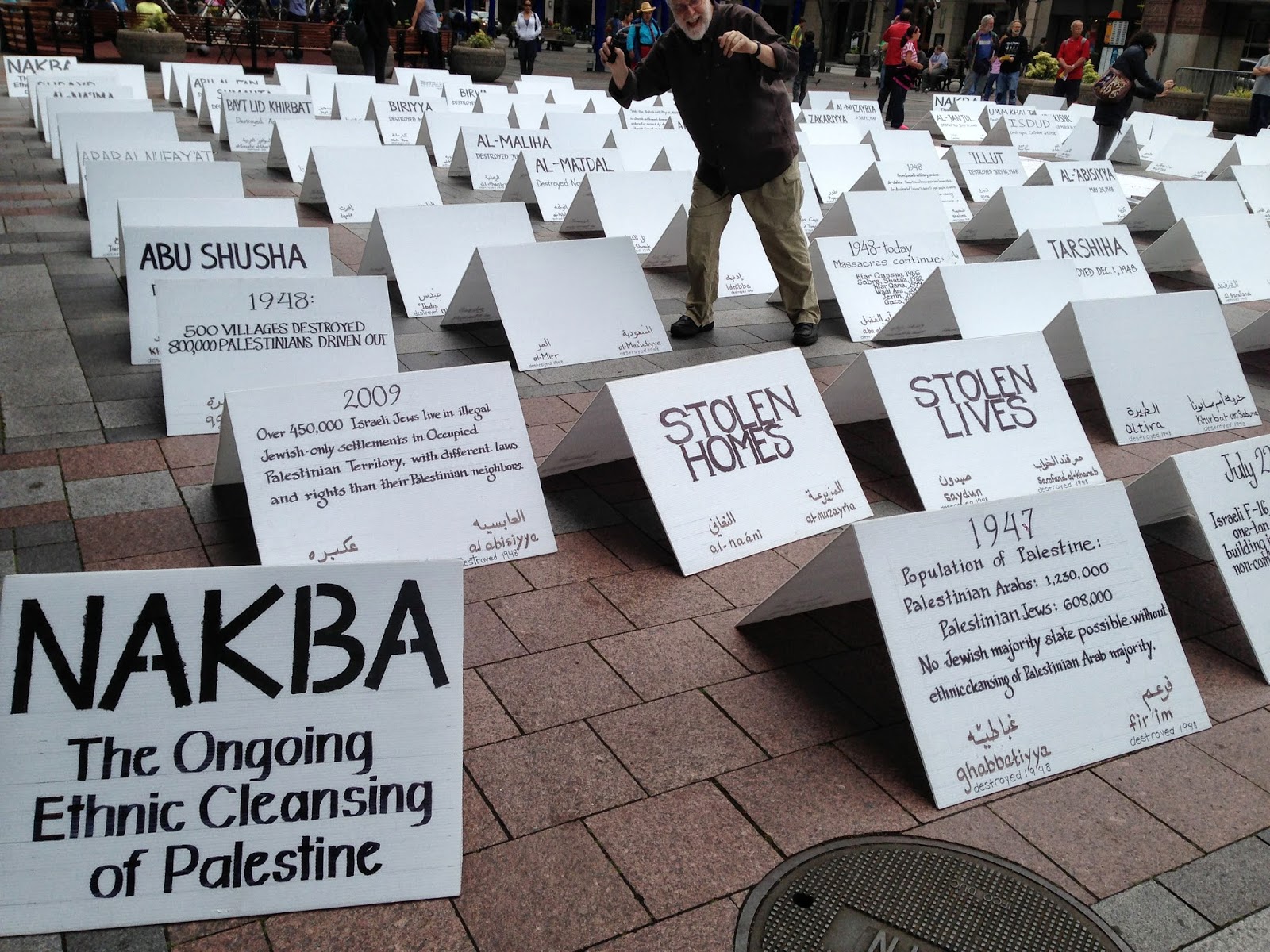 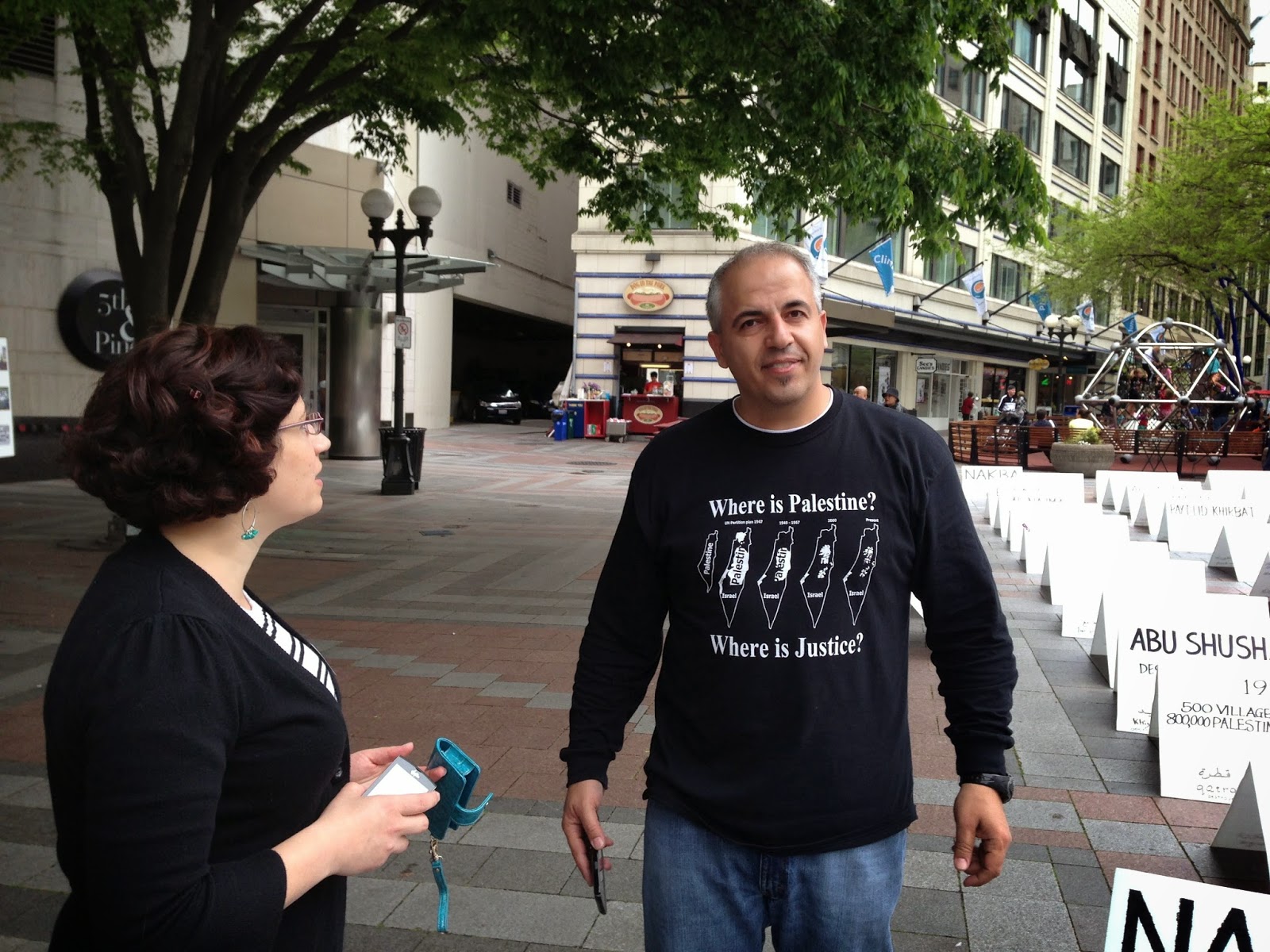 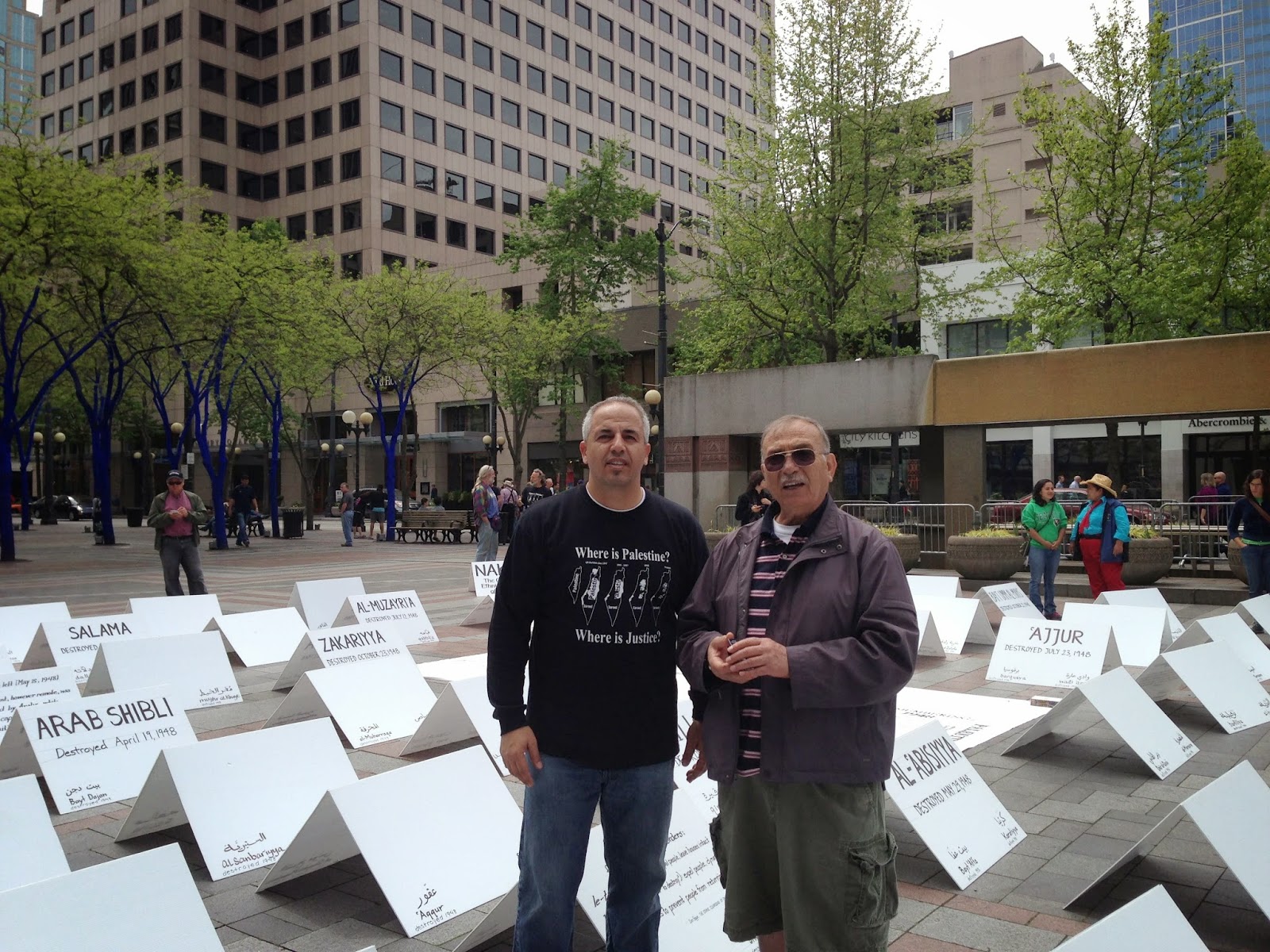 Way to Go, Big Strong IDF! You Captured a 6-Year Old on His Way to School and Scared Him to Death

Dr. Jill Stein and Dr. Margaret Flowers -- The Climate and Healthcare Are Both in Critical Condition!

WE SHOULD BE VERY WORRIED! "NATO, Ukraine and U.S. Imperialism" -- Rick Rozoff from StopNATO

#15Now Has Lively Picket at Wallingford Starbucks -- Tons of Support for $15 Min. Wage in This Seattle Neighborhood! 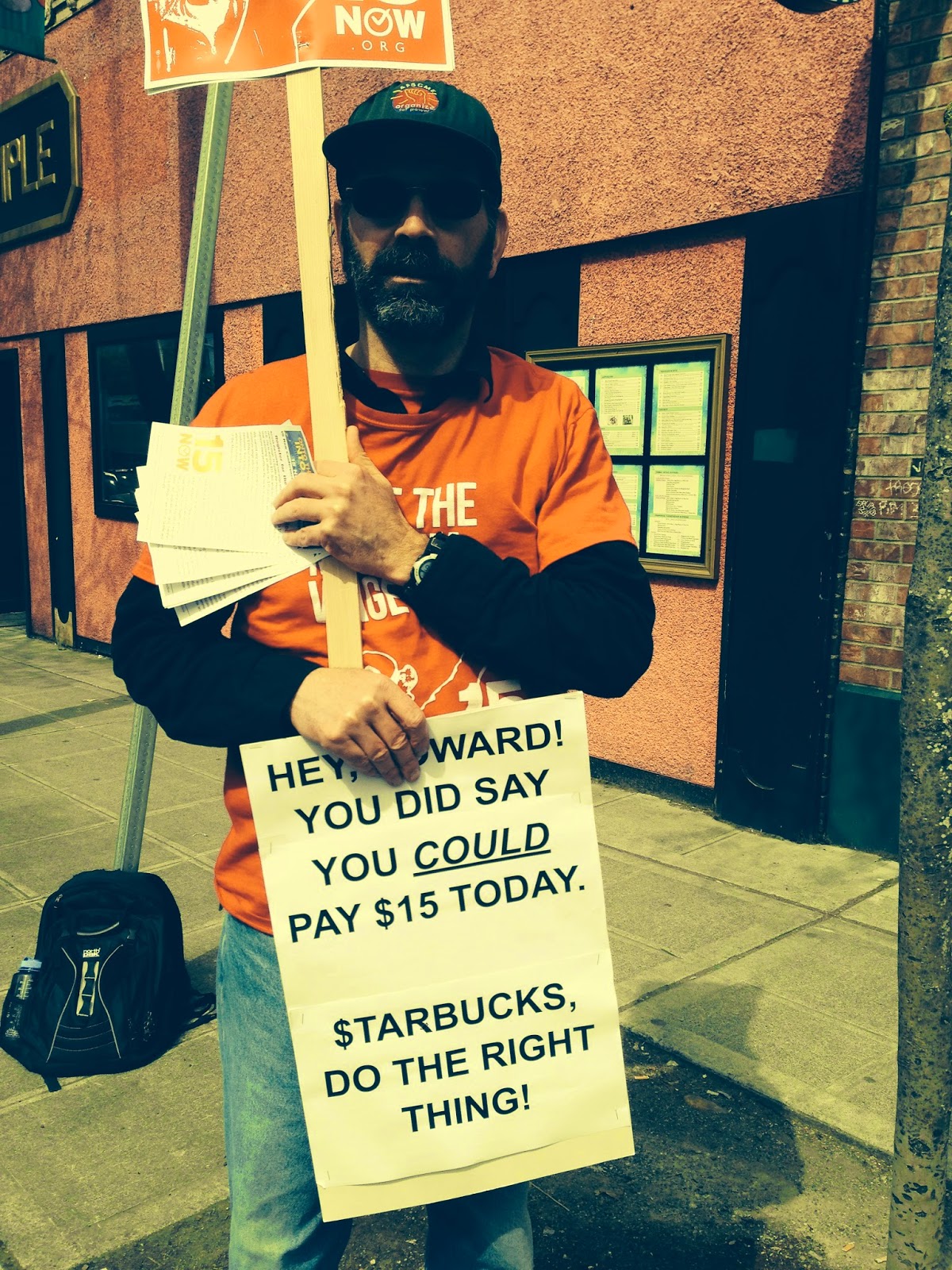 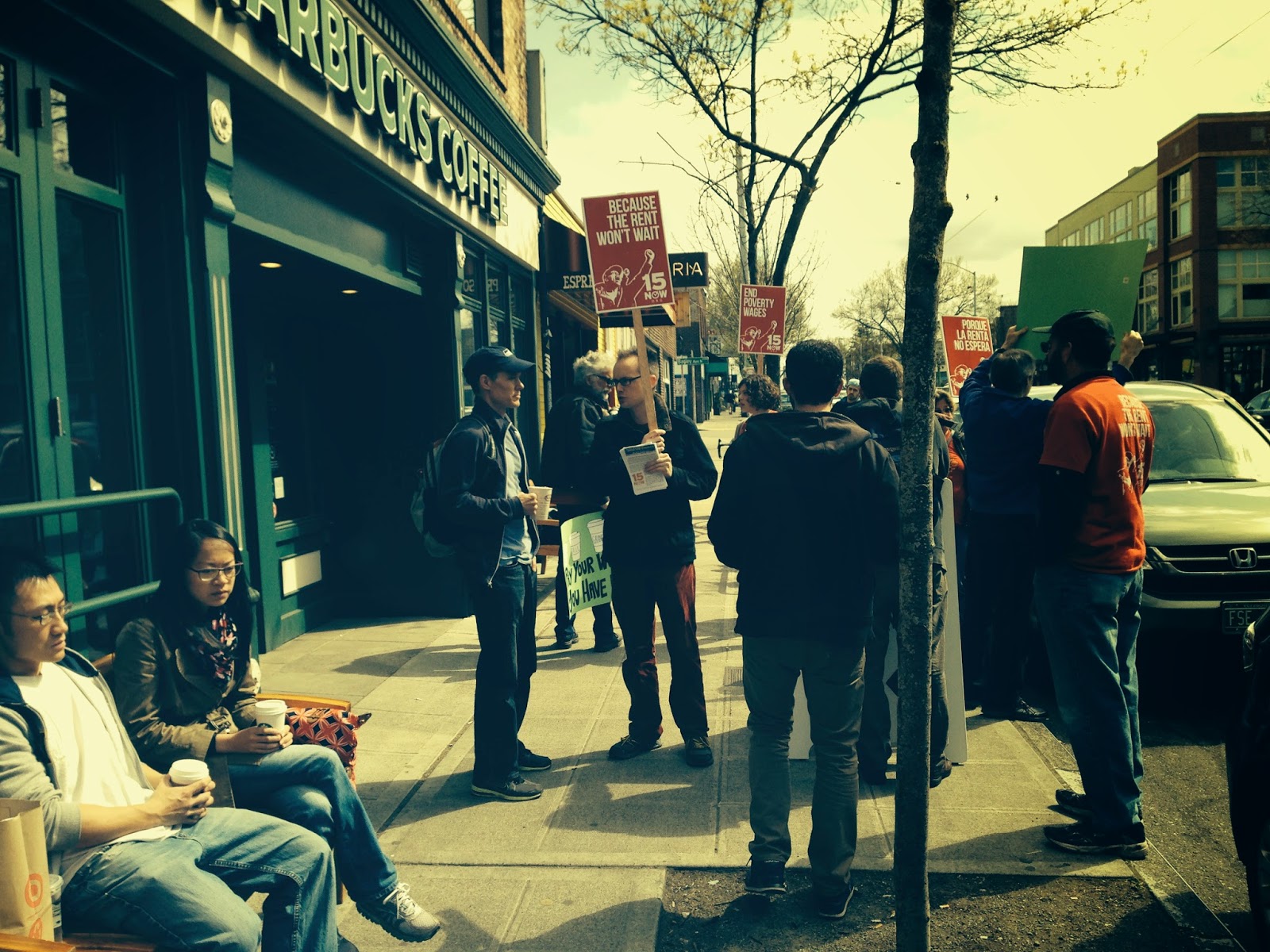 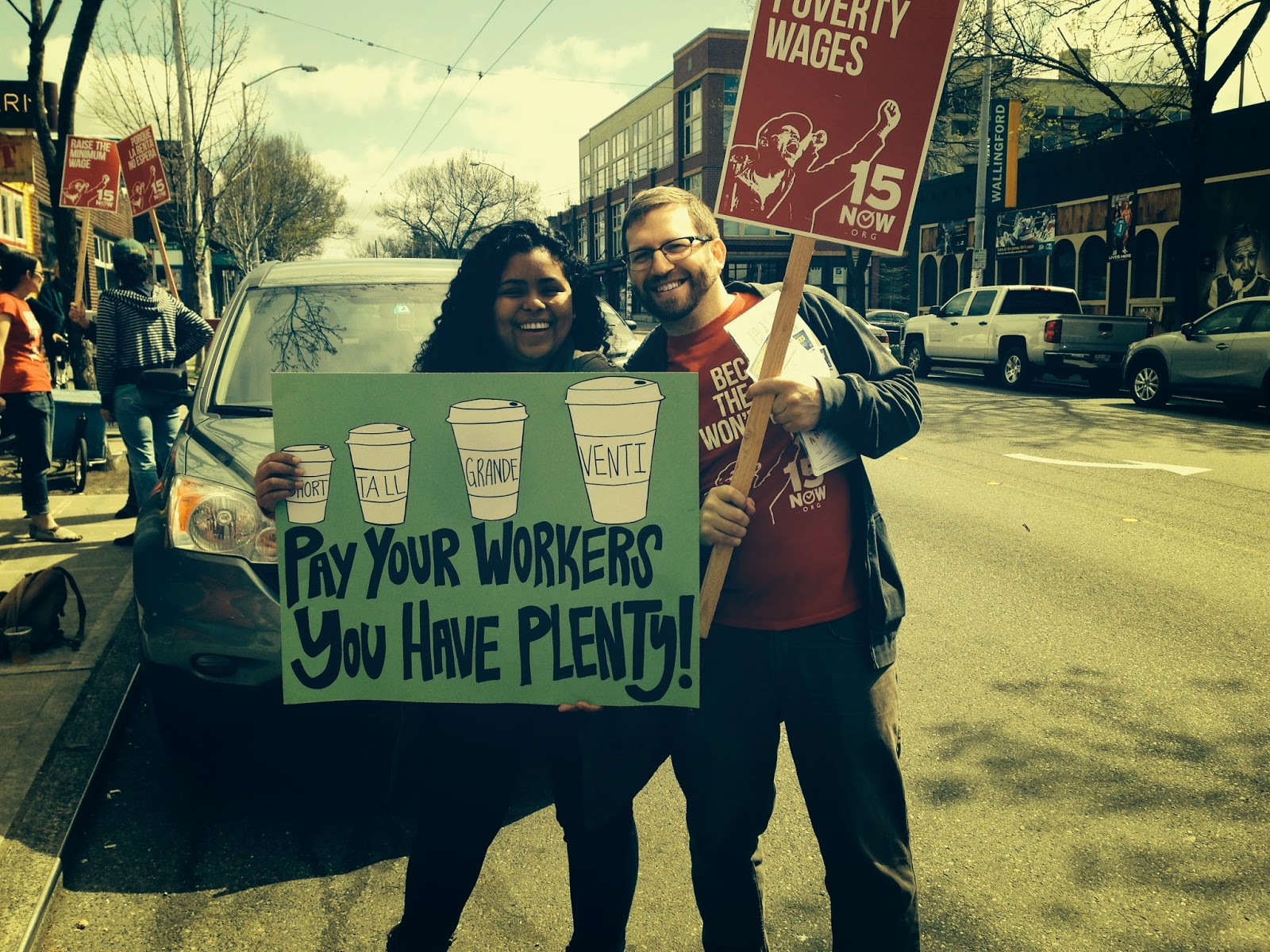 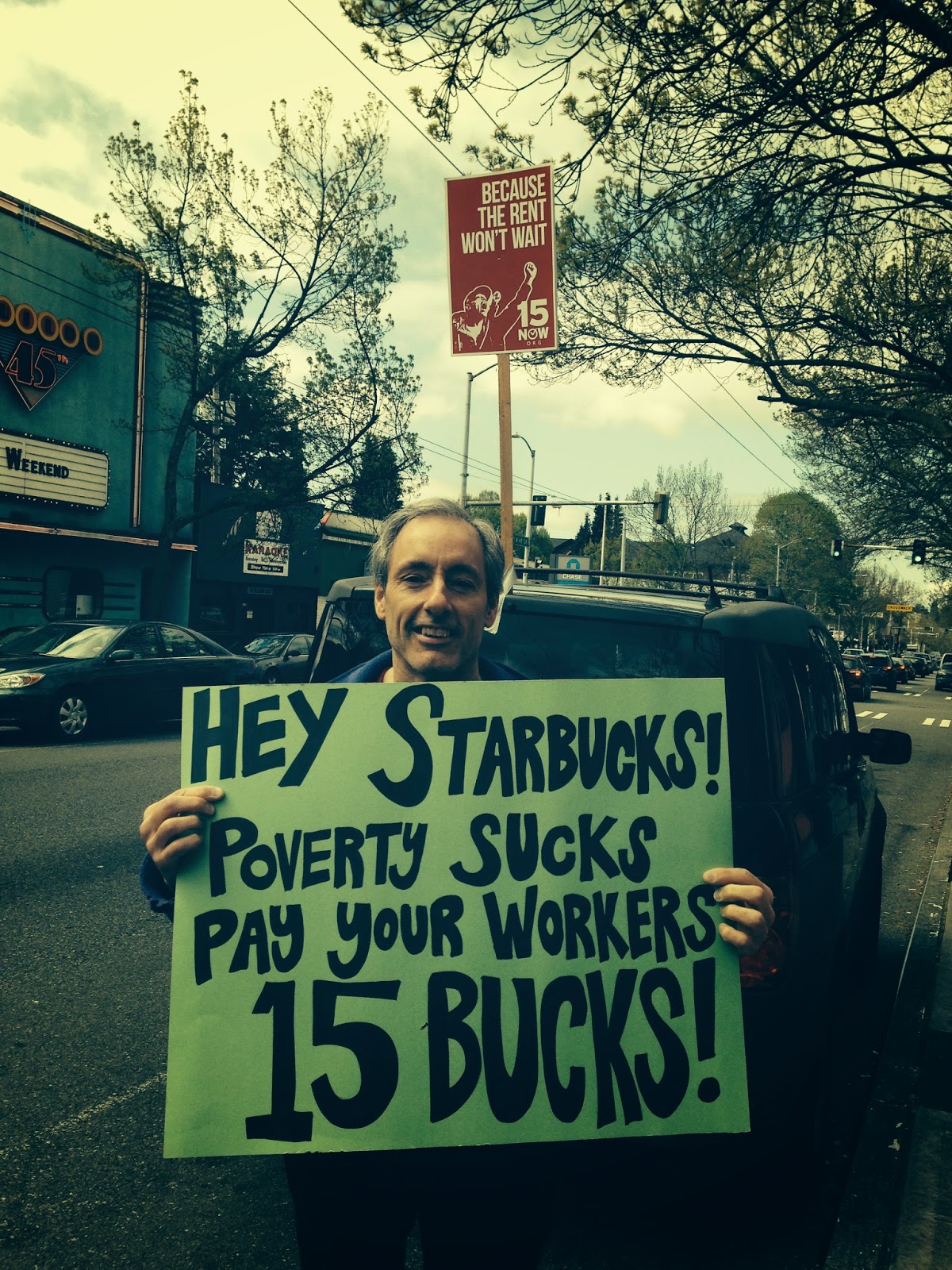 "Off With His Head": Court Upholds Obama's Power to Kill -- Michael Ratner of Center for Constitutional Rights

http://youtu.be/VAdHeYWwLw8
Posted by LJansen at 10:48 AM 0 comments