Call for Emergency "Day After" Protest if US Attacks Syria

The prospects remain grim. Damn another coalition of the willing; Washington already has the British and French poodles in the bag, and full support - in air-con safety - from the democratic Gulf Cooperation Council petro-monarchies, minion Jordan and nuclear power Israel. This is what passes for ''international community'' in the newspeak age. The Brits are already heavily spinning that no UN Security Council resolution is needed; who cares if we do Iraq 2.0? For the War Party, the fact that Chairman of the Joint Chiefs of Staff General Martin Dempsey said Syrian ''rebels'' could not promote US interests seems to be irrelevant. Washington already has what it takes for the Holy Tomahawks to start flying; 384 of them are already positioned in the Eastern Mediterranean. B-1 bombers can be deployed from Al Udeid Air Base in Qatar. And bunker-busting bombs will certainly be part of the picture. What happens next requires concentric crystal balls - from Tomahawks to a barrage of air strikes to Special Ops commandos on the ground to a sustained air campaign lasting months. In his long interview to Izvestia, Assad gives the impression he thinks Obama is bluffing. What's certain is that Syria won't be a ''piece of cake'' like Libya; even depleted on all fronts, Gaddafi resisted for eight long months after NATO started its humanitarian bombing. Syria has a weary but still strong army of 200,000; loads of Soviet and Russian weapons; very good antiaircraft systems; and full support from asymmetrical warfare experts Iran and Hezbollah. Not to mention Russia, which just needs to forward a few S-300 air defense batteries and relay solid intelligence. So get used to how international relations work in the age of newspeak. General Abdel Fattah al-Sisi's army in Egypt can kill hundreds of his own people who were protesting against a military coup. Washington couldn't care less - as in the coup that is not a coup and the bloodbath that is not a bloodbath. No one knows for sure what exactly happened in the chemical weapons saga near Damascus. But that's the pretext for yet another American war - just a few days before a Group of 20 summit hosted by Putin in St Petersburg. Holy Tomahawk! R2A, here we go.
Posted by LJansen at 8:07 AM 0 comments

None of Us Are Free, If One of Us is Chained -- Solomon Burke

"No, Thanks: Stop saying 'support the troops'” -- Steven Salaita via Ali Abunimah

Remembrance: Your Support For The Institution of War -- 15 Revealing Moments

http://youtu.be/GiilVintUr0
Posted by LJansen at 10:03 AM 0 comments

All four videos are good, but this last one is excellent on what is currently underway with the Kerry talks, etc.  Max is also very good in answering Paul Jay's question about anti-semitism (or as Max points out, the lack thereof) in the Palestinian solidarity movement.

A movement has begun to persuade Obama to pardon or commute. Manning’s sentence to time served (Bush commuted Scooter Libby’s jail sentence before he went to jail) http://www.amnesty.org.uk/news_details.asp?NewsID=20930 The
Center for Constitutional Rights says:

We must channel our outrage and continue building political pressure for Manning’s freedom. President Obama should pardon Bradley Manning, and if he refuses, a presidential pardon must be an election issue in 2016.

by Bradley Manning
Common Dreams, August 21, 2013
http://www.commondreams.org/
The following is a rush transcript by Common Dreams of the statement made by Pfc. Bradley Manning as read by David Coombs at a press conference on Wednesday following the announcement of his 35-year prison sentence by a military court:
The decisions that I made in 2010 were made out of a concern for my country and the world that we live in. Since the tragic events of 9/11, our country has been at war.  We've been at war with an enemy that chooses not to meet us on a

Manning invoked that late Howard Zinn, quoting, "There is not a flag large enough to cover the shame of killing innocent people."ny traditional battlefield, and due to this fact we've had to alter our methods of combating the risks posed to us and our way of life.
I initially agreed with these methods and chose to volunteer to help defend my country.  It was not until I was in Iraq and reading secret military reports on a daily basis that I started to question the morality of what we were doing.  It was at this time I realized in our efforts to meet this risk posed to us by the enemy, we have forgotten our humanity.  We consciously elected to devalue human life both in Iraq and Afghanistan.  When we engaged those that we perceived were the enemy, we sometimes killed innocent civilians.  Whenever we killed innocent civilians, instead of accepting responsibility for our conduct, we elected to hide behind the veil of national security and classified information in order to avoid any public accountability.
In our zeal to kill the enemy, we internally debated the definition of torture.  We held individuals at Guantanamo for years without due process. We inexplicably turned a blind eye to torture and executions by the Iraqi government.  And we stomached countless other acts in the name of our war on terror.
Patriotism is often the cry extolled when morally questionable acts are advocated by those in power.  When these cries of patriotism drown our any logically based intentions [unclear], it is usually an American soldier that is ordered to carry out some ill-conceived mission.
Our nation has had similar dark moments for the virtues of democracy—the Trail of Tears, the Dred Scott decision, McCarthyism, the Japanese-American internment camps—to name a few.  I am confident that many of our actions since 9/11 will one day be viewed in a similar light.
As the late Howard Zinn once said, "There is not a flag large enough to cover the shame of killing innocent people."
I understand that my actions violated the law, and I regret if my actions hurt anyone or harmed the United States.  It was never my intention to hurt anyone. I only wanted to help people.  When I chose to disclose classified information, I did so out of a love for my country and a sense of duty to others.
If you deny my request for a pardon, I will serve my time knowing that sometimes you have to pay a heavy price to live in a free society.  I will gladly pay that price if it means we could have country that is truly conceived in liberty and dedicated to the proposition that all women and men are created equal.

Visit my website www.michaelmunk.com
Posted by LJansen at 8:52 PM 0 comments 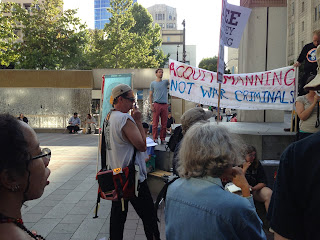 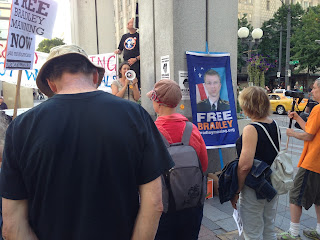 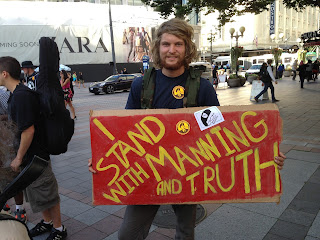 Seattle:  Supporters of Bradley Manning to Protest Prison Sentence5 pm Westlake Park on Wednesday, August 21
Supporters of Army whistle-blower Pfc. Bradley Manning will rally in downtown Seattle on Wednesday, the day of his sentencing by a military judge at Fort Meade, Maryland.  Judge Col. Denise Lind has announced that she will read his sentence on Wednesday, probably in the morning. The 5 pm rally at Westlake Park, 4th & Pine in downtown Seattle, is being organized by Greater Seattle Veterans For Peace.  It will be followed by a march to Capitol Hill.While a 22-year-old intelligence analyst stationed in Iraq in 2009-10, Pfc. Manning witnessed war crimes, rampant corruption, and covert abuse.  He exposed what he saw by releasing hundreds of thousands of classified military and diplomatic files to the transparency website WikiLeaks.Bradley Manning has been nominated for the Nobel Peace Prize three years in a row. Last week more than 100,000 signatures in support of his 2013 nomination were delivered to the Nobel committee in Norway.
The US Army has held Bradley Manning in prison for over three years prior to his court martial, including over nine months in solitary confinement.  The abusive conditions of his confinement have been condemned by Amnesty International and the United Nations Special Rapporteur on Torture. This week Army prosecutors asked the military judge, Col. Denise Lind, to sentence Pfc. Manning to 60 years in prison.  Col. Lind has found Manning to be guilty of 20 of the 22 counts with which he was charged, including violations of the 1917 Espionage Act.
“Bradley Manning stands convicted of doing his duty under the plain wording of international law: to report war crimes that he had knowledge of,” said Anton Black, Bradley Manning Support Coordinator for Veterans For Peace #92 in Seattle.  “His chain of command refused to investigate the 'war porn' contained in records they possessed when he pointed this out.”
In early 2010, Manning gave Wikileaks a copy of an Army video that showed US soldiers gunning down unarmed civilians in Baghdad from an Apache helicopter.  The video, dubbed “Collateral Murder” by Wikileaks, has been viewed millions of times on YouTube.“The U.S. government has a proven track record of not reporting or prosecuting war crimes it orders and its forces carry out,” said Anton Black of Veterans For Peace.  “Cover-up and minimal prosecution after being reported by whistle blowers is the norm.  No one has been prosecuted for officially ordered torture.  The fact that the invasion of Iraq was based upon bald-faced lies and is therefor illegal has never been officially addressed.  No one has been prosecuted for the crimes Bradley revealed.  Instead, the whistle-blower is being prosecuted.”

"This has not been a trial - this has been a witch hunt,” said Devin McDonnell, a young Seattle activist.  “I am outraged that the Army wants to put someone in prison for 60 years for obeying their own code of conduct and reporting war crimes.  We must stand up for Bradley Manning, for freedom of the press, and for the value of what he did for the world by showing us the truth."
Gerry Condon, a member of the national Board of Directors of Veterans For Peace who attended Bradley Manning's court martial, will speak at the 5 pm rally at Westlake Park.  “The government wants to know everything about us – they have stolen our privacy,” said Condon.  “But they don't want us to know what they are doing in our name and with our tax dollars.  Bradley Manning should be freed immediately.”

The Bradley Manning Support Network is calling for President Obama to pardon Bradley Manning.
For more information, go to www.bradleymanning.org  and  www.vfp92.org
END
Posted by LJansen at 3:52 PM 1 comments

How to support Graeme Dunstan, who disarmed a helicopter in Australia when U.S. was having war games there:  http://www.indymedia.ie/article/103978
Posted by LJansen at 8:09 PM 0 comments

Join us this Saturday to call for an END to the  ISRAELI OCCUPATION of PALESTINE!
Come join us to demand Justice for the Palestinian People.
Where: Westlake 4th & Pine
When: Saturday August 17, Noon-2pm
####
Amin Odeh
VoicesforPalestine.org
"Stand up for what is right,even if you are standing alone"

"Negotiations: We'll Squeeze the Peace Out of You" by Nidal El Khairy 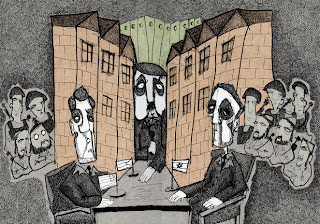 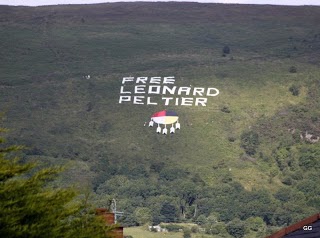 Bolivians Rally in Support of Bradley Manning! I am in awe! 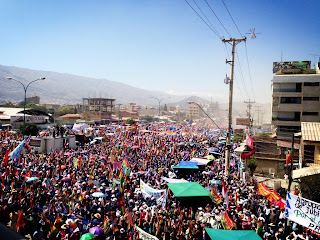 Join us this Saturday to call for an END to the ISRAELI OCCUPATION of PALESTINE!
Come join us to demand Justice for the Palestinian People.
Where: Westlake 4th & Pine
When: Saturday August 3, Noon-2pm
####
Amin Odeh
VoicesforPalestine.org
"Stand up for what is right,even if you are standing alone"