Pink Floyd Co-Founder Roger Waters: The US and UK are Trying to .KILL Julian Assange

U.S. Military Could Collapse Within 20 Years Due to Climate Change, Report Commissioned By Pentagon Says

According to a new U.S. Army report, Americans could face a horrifically grim future from climate change involving blackouts, disease, thirst, starvation and war. The study found that the US military itself might also collapse. This could all happen over the next two decades, the report notes.

The senior US government officials who wrote the report are from several key agencies including the Army, Defense Intelligence Agency, and NASA. The study called on the Pentagon to urgently prepare for the possibility that domestic power, water, and food systems might collapse due to the impacts of climate change as we near mid-century.
Posted by LJansen at 8:14 AM 0 comments

Conflict Between Trump and Military-Diplomatic Establishment Is Full of ...

"This
is the most important stance any candidate has taken affecting press
freedom so far. Hopefully this will force others to follow," said Trevor
Timm, executive director of the Freedom of the Press foundation
by
Jake Johnson, staff writer


Sen. Bernie Sanders vowed,
if elected president in 2020, to break with both the Trump and Obama
administrations by refusing to use the repressive, century-old Espionage
Act to prosecute whistleblowers, a stance that was applauded by press
freedom advocates and former NSA contractor Edward Snowden.

In an interview with The Intercept's Ryan Grim released Tuesday, Sanders condemned President Donald Trump's repeated attacks on the Ukraine whistleblower and emphasized the crucial role whistleblowers play in the political process.

Asked if the Espionage Act of 1917 should be used against those who
raise the alarm about government wrongdoing, Sanders said, "Of course
not."

"The law is very clear: Whistleblowers have a very important role to
play in the political process and I am very supportive of the courage of
that whistleblower, whoever he or she may be," Sanders said of the
individual who filed the complaint about Trump's call with Ukrainian
President Volodymyr Zelensky.

Grim pointed out that the 1917 law "had
largely gone out of fashion until it was deployed heavily by the Obama
administration, which prosecuted eight people accused of leaking to the
media under the Espionage Act, more than all previous presidents combined."

"President Donald Trump is on pace to
break Barack Obama's record if he gets a second term," Grim wrote. "He
has prosecuted eight such whistleblowers, five of them using the
Espionage Act, according to the Press Freedom Tracker."

Former
U.S. Army private Chelsea Manning, currently behind bars for refusing
to testify before a secretive grand jury, was prosecuted by the Obama
administration for Espionage Act violations and served seven years in
prison before Obama commuted her sentence at the end of his presidency.

Manning released classified information to WikiLeaks, whose founder and publisher, Julian Assange, has been indicted by the Trump administration for espionage.

Progressives hailed Sanders' pledge to end the use of the Espionage Act against whistleblowers as a potential "sea-change" and urged other 2020 Democratic presidential candidates to follow his lead.

Trevor Timm, executive director of the
Freedom of the Press Foundation, called Sanders' vow "the most
important stance any candidate has taken affecting press freedom so
far."

Snowden—who, like Manning and Winner, was charged with Espionage Act violations—tweeted a simple response to Sanders's pledge: "Whoa."
Posted by LJansen at 3:42 PM 0 comments

Will the Next Trudeau Government Keep Its Promises to Indigenous Peoples?

Tulsi Gabbard Isn't a Russian Asset. It's More Complicated Than That. 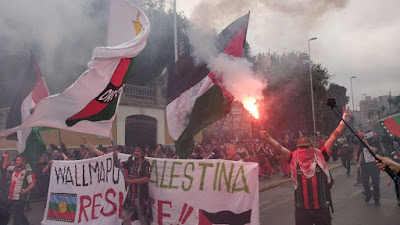 Exclusive: A group of 10 MPs from across the political spectrum have joined forces to form a Parliamentary Working Group focused on bringing home Wikileaks founder Julian Assange.

LNP member George Christensen and independent Andrew Wilkie have agreed to be co-chairs and have put forward the proposed group for approval from the President of the Senate and the Speaker of the House of Representatives.

It is understood the group includes Nationals MP Barnaby Joyce, members of the Labor Party and the cross bench.
Mr Wilkie told News Corp Australia he hopes the group will raise the profile of Assange’s case and educate the public.

He believes people who may have been wary of Assange because of the rape allegations levelled against him will change their view when they know what is happening.

He said Assange has not be charged with rape and the attempts to extradite him to the US have
nothing to do with those allegations.

Assange, 48, faces 18 counts in the US including conspiring to hack government computers and violating an espionage law.

Assange attracted the attention of the US when Wikileaks published hundreds of thousands of secret US documents and video about the war in Iraq and Afghanistan.

But Assange had been told he could leave Sweden, there are no charges and there has been no extradition case to Sweden.

He was granted asylum in the Ecuadorean embassy in London in 2012 on the basis that he risked human rights abuses at the hands of the United States.

He was dragged out of the Ecuadorean Embassy earlier this year and is being held on remand ahead of the extradition hearing to the US.
.
Australian Barrister Greg Barnes, who is acting as an Adviser to the Assange campaign said: “People

are quite naive and misunderstand what is going on.”

“If the United States get their way, he will probably be tried in secret, in a kangaroo court and given life in jail.”

The formation of the group comes ahead of Assange’s scheduled court appearance in London on Monday and calls for the Federal Government to intervene on Assange’s behalf.

Assange is being detained in one of Britain’s toughest prisons Belmarsh and his legal team have warned his health is deteriorating. A full extradition hearing is not expected to go ahead until February.

Mr Barnes said it is the first time that the US has sought to use its laws to prosecute a person who did not commit an act in a US jurisdiction or have any links to the US.

“It is a dangerous step and it means that any journalist or person who publishes material deemed to be classified under US espionage laws could be prosecuted irrespective of having any link to the US.”
Mr Barnes said the prosecution’s use of extra territorial reach is unique and represents a threat to journalists’ independence.

“It is not something that has been even been considered by the Five Eyes before,” he said.

“I think it would be highly unlikely that Australia would seek to prosecute someone say in Belgium for publishing something in that country.”

Businessman Dick Smith has also come out swinging over what he has called “outrageous” attempts by the US Government to extradite Julian Assange using laws which give “universal jurisdiction over every person on earth ”.

Mr Smith has written to the US Ambassador to Australia, Arthur Culvahouse Jr, warning the relationship with Australia will be damaged if the US persists in making an Aussie a “scapegoat” for the security failures of its own government.

“It is unfair and wrong to pick on, blame and lock up an Australian because the Americans couldn’t keep their own secrets, secret,” said Mr Smith.

“Mr Assange has only been successful in publishing US documents and gaining unauthorised access because those in charge of keeping that information confidential were not competent.”

“He has done them a favour — if Julian Assange sitting at is kitchen bench can break into US systems then anyone can — like the Russians.” 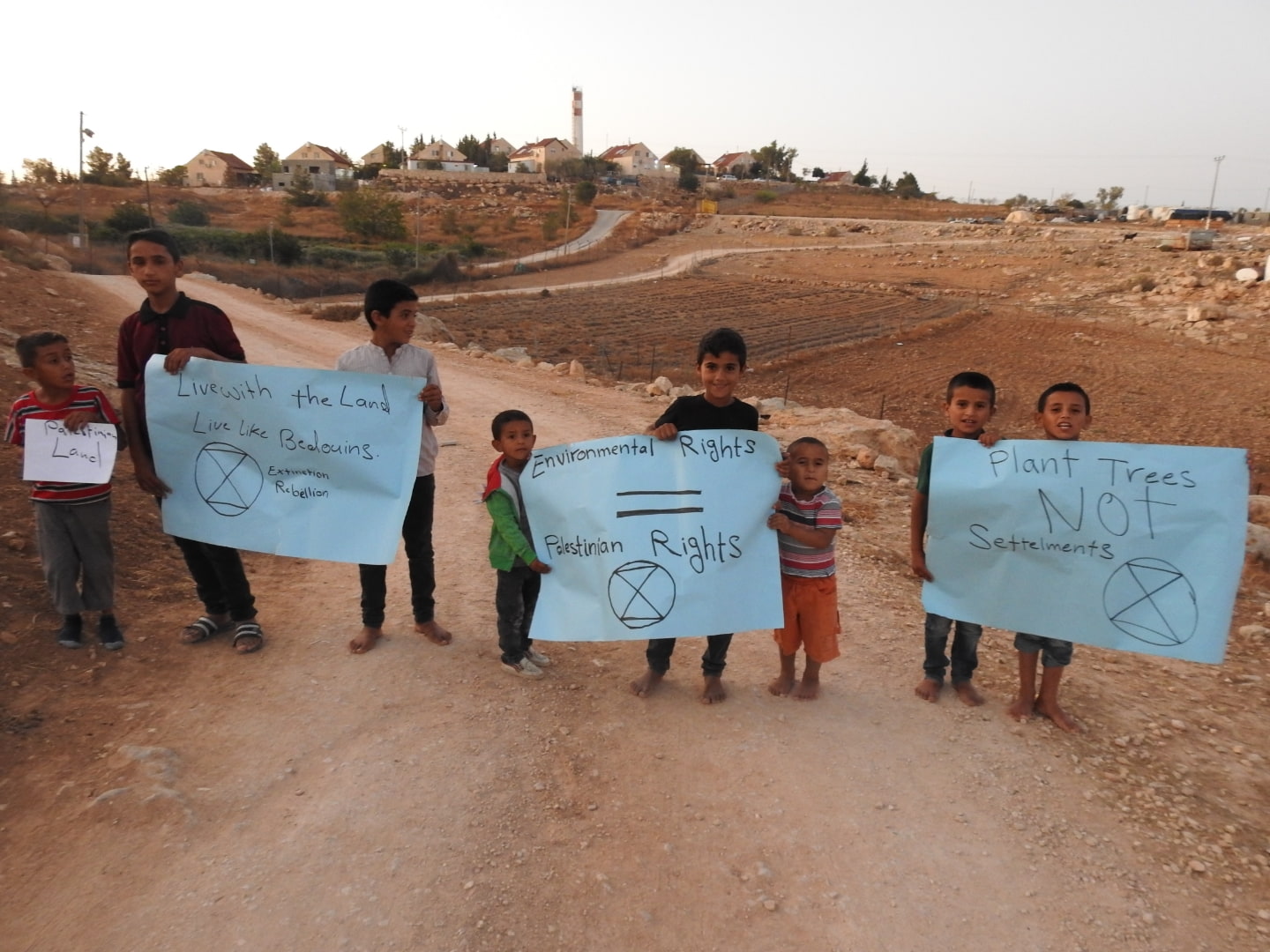 These Bedouin children from the West Bank village of Umm al Khair have one of the lowest carbon footprints on earth, yet they are among those who will suffer the most from ecological breakdown.
Palestinians will be amongst those hardest hit by the crisis. This environmental inequality is further compounded by a political one, as Palestinian access to water is restricted and much of their wells and infrastructure have been destroyed. With droughts and desertification likely to hit the region, life is made especially hard.

In Umm al Khair, most of the village’s water supply has been stolen by the neighbouring settlement of Carmel (seen in the background), leaving the area’s Bedouins with an average of just 15 litres of water per day.

Community activist and Umm al Khair resident Awdah Hathaleen said: “They control the water network, and they only allow the people of Umm Al-khair to get a little water. More than 5000 plants of thyme died this year because of the water problems... They don't have mercy for the human; how they will be merciful with the environment?”
Posted by LJansen at 1:07 PM 0 comments Live with the Land!

How Do You Form an Opinion on Climate Change?

Tulsi Calls Out CNN To Their Face!

A Palestinian Election and Reconciliation After 13 Years?

What if We Nuke a City?

by Elliot Sperber Taking Out Columbus

Everyone wants to kill Hitler
On the battlefield in Ypres
via time machine
Though, what do you think
About going back further
And taking out Captain Columbus
Instead — landing, let’s say,
On the Santa Maria —
And aiding the mutineers back then?
Maybe so much of the globe,
Today — New York Harbor, Guantanamo
Bay — would still smell like flowers
Posted by LJansen at 10:59 AM 0 comments

The Very Radical Politics Of Dolly Parton’s ‘9 to 5’--WATCH THIS!

Why Trump Has No Fear Of Impeachment

Will Impeachment Change Anything for the Masses?

This Is Not a Drill: 700+ Arrested as Extinction Rebellion Fights Climate Crisis with Direct Action

Trump Fails to Gain the Confidence of North Korea

Tweet Listen to "Trump Fails to Gain the Confidence of North Korea" on Spreaker.

Trump meddled in Ukraine, and he’s not alone

Police Chased Cyclist for Not Having A Reflector. He Ended up Dead [do our politicians even care?]

What Is the Financial Cost to Society of Wrongful Convictions? [let alone the human toll!!!!]

MISA My Fish is your Fish--About Legacy of U.S. Nuclear Testing in Marshall Islands

Mother of assassinated activist Berta Cáceres speaks out against US-back...