Is Participatory Democracy the Solution to Venezuela's Crisis? @DimitriLascaris in Venezuela

GO TO LINK IF YOU WANT TO SEE THE WHOLE GREAT VIDEO
Posted by LJansen at 12:01 PM 0 comments

The Centre Ground: Where Politics Goes to Die! -- Re: The "New Independent" Politicians in Britain

‏Verified account @RaniaKhalek 7h7 hours ago
Here is my documentary (that @CNN got censored from @facebook ) on the sewage crisis in rural Alabama that's led to the resurgence of hookworm, a disease of extreme poverty that the UN was shocked to find in a country as rich as the US.
Posted by LJansen at 9:11 AM 0 comments

At the end of the day, the only conceivable way forward to prevent the world from turning into an oven is “system change” via transformation to decarbonized energy supply technologies with deep penetration of efficient technologies and a profound shift in behavior and reframing the value propositions re success and progress, an economic model that fits the purpose of mitigation, like eco economics.
As for the current economic model of high-end neoliberal capitalism, it must be displaced in favor of eco economics. What are the odds? One hundred percent (100%) it will happen but way too late!
According to Kevin Anderson, “Everything is pointed in the wrong direction… We are guaranteed defeat unless we start to think radically differently.” He concludes: “We have an outside chance of still meeting 2C if society addresses the political, social, and economic implications, as well as the technical ones.”
But, what if it’s too late?
Postscript: “Winning slowly is basically the same thing as losing outright. In the face of both triumphant denialism and predatory delay, trying to achieve climate action by doing the same things, the same old ways means defeat. It guarantees defeat.” (Alex Steffen – American award-winning futurist, 2017)
Posted by LJansen at 8:13 AM 0 comments

Just Remember: We Got the Guillotine! (Boots Riley)

https://youtu.be/acT_PSAZ7BQ
Posted by LJansen at 7:48 AM 0 comments

My Favorite Valentine Picture of All Time 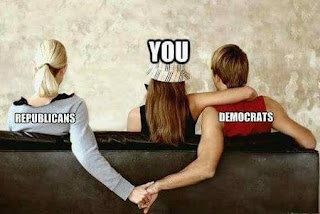 Found on Counterpunch
Posted by LJansen at 3:00 PM 0 comments

In Caracas, Ordinary Venezuelans Speak to The Real News About Venezuela's Crisis [8 Minutes]

A documentary promoted by Jewish Voice for Labour exposes the campaign to discredit the Labour Party under Jeremy Corbyn’s leadership as one based on disinformation, fake news and dirty tricks.
Posted by LJansen at 4:47 PM 0 comments

In Venezuela, White Supremacy is a Key to Trump’s Coup--Greg Palast

On January 23, right after a phone call from Donald Trump, Juan Guaidó, former speaker of Venezuela’s National Assembly, declared himself president. No voting. When you have official recognition from The Donald, who needs elections?
Say what?
I can explain what’s going on in Venezuela in three photos:
First, we have Juan Guaidó, self-proclaimed (and Trump-proclaimed) president of the nation, with his wife and child, a photo prominently placed in The New York Times.

Next, the class photo of Guaidó’s party members in the National Assembly, white as snow…

…especially when compared to their political opposites in the third photo, the congress members who support the elected President Nicolás Maduro. The Maduro supporters are nearly all of a darker hue.

This is the story of Venezuela in black and white, the story not told in The New York Times nor the rest of our establishment media. This year’s so-called popular uprising is, at its heart, a furious backlash of the whiter (and wealthier) Venezuelans against their replacement by the larger Mestizo (mixed-race) poor.
Four centuries of white supremacy in Venezuela by those who identify their ancestors as European came to an end with the 1998 election of Hugo Chavez who won with the overwhelming support of the Mestizo majority. This turn away from white supremacy continues under Maduro, Chavez’ chosen successor.
In my interviews with Chavez for BBC beginning in 2002, he talked with humor about the fury of a white ruling class finding itself displaced by dark-skinned man who was so visibly “Negro e Indio,” a label he wore loudly and proudly.
Why did the poor love Chavez? (And love is not too strong a word.) As even the US CIA’s surprisingly honest Fact Book states:

“Social investment in Venezuela during the Chavez administration reduced poverty from nearly 50% in 1999 to about 27% in 2011, increased school enrollment, substantially decreased infant and child mortality, and improved access to potable water and sanitation through social investment.”

What should be added is that, even more than the USA, race and poverty are linked.
But just as Maduro took office in 2013, the price of oil began its collapse, and the vast social programs that oil paid for were now paid for by borrowing money and printing it, causing wild inflation. The economic slide is now made impossibly worse by what the UN rapporteur for Venezuela compared to “medieval sieges.” The Trump administration  cut off Venezuela from the oil sale proceeds from its biggest customer, the USA.
Everyone has been hurt economically, but the privileged class’s bank accounts have become nearly worthless. So, knowing that the Mestizo majority would not elect their Great White Hope Guidó, the angry white rich simply took to the streets — often armed. (And yes, both sides are armed.)
I’ve seen this movie before. When I look at today’s news reports of massive demonstrations against the so-called “dictatorship” of Venezuela’s left government, it looks awfully like 2002, when I was first in Caracas reporting for BBC Television.
Then, The New York Times, NPR and other mainstream outlets in the US reported on marches against the Chavez government, showing the tens of thousands of Venezuelans calling for Chavez’s removal. But when I took my BBC camera crews to march with these protesters, they were clearly from the light-skinned minority. They were also the wealthy — and they wanted you to know it. Many of the women marched in high heels, the men peacocking in business suits, proudly displayed in the uniforms of their privileged class.
The Chavistas wore patriotic yellow, blue and red T-shirts, sneaks, jeans.
Race was an issue as much as political philosophy. When I marched alongside the opposition demonstrators, they shouted “Chavez, Monkey!” and worse.
Many in the US have never heard this story of race war in Venezuela (and war is what it is), as the US press does not recognize its own racial bias. In 2002, as today, the massive demonstrations of the whiter Venezuelans were reported as evidence that Chavez was wildly unpopular. Yet, the day after each anti-Chavez march, I would witness and film the pro-Chavez demonstrations that flooded Caracas with an ocean of nearly half a million marchers, overwhelmingly poor Mestizos, that received little or no coverage in the US press.
The bias continues. The New York Times did not run a photo of this past week’s pro-Maduro demonstrations. But in hard-to-find photos and reports from my colleagues on the ground, the Chavistademonstrations are bigger, involving mass turnouts in several cities, not just wealthy neighborhoods in Caracas.

Why do the poor march for Maduro? Even though the Mestizo majority suffers today, they will not turn back to the pre-Chavez days of de facto apartheid.
And we must remember this is not the first time the US government has tried to overthrow the elected government in Venezuela.
In 2002, George W. Bush’s State Department cheer-led the coup. The plotters kidnapped Chavez and held him hostage. The coup was led by an oil industry leader and head of the Chamber of Commerce, Pedro Carmona, who had seized the nation’s White House, and, like Guaidó today, declared himself president. Carmona told me proudly about the fancy inaugural ball held by the nation’s elite and attended by Bush’s ambassador.
But the Bush/Carmona coup collapsed when a million darker-skinned Venezuelans flooded the capital and forced the plotters to return their hero, the supposedly unpopular Chavez, to Miraflores, the Presidential Palace. “Presidente” Carmona fled.
Today, Guaidó’s supporters, like Carmona’s, know they can’t win an election given the overwhelming fact of the newly empowered Mestizo majority. So Guaidó has skipped the idea of an election altogether, simply replacing running for office with the “recognition” from Trump and allies which Guaidó can’t get from Venezuelans.
When I see the images and hear the chants of the anti-Chavista demonstrators now, I’m also reminded of what I saw at a Trump rally in Macon, Georgia, this past November. The president slid out of Air Force One to tell the crowd  — heavily weighted with white supremacists — that they needed to take back their country from those “invading” the border. Trump told them to fear gubernatorial candidate Stacey Abrams, who is Black, saying she would “turn Georgia into Venezuela.”
I don’t think Trump was talking about Abrams’ program to bring universal health care to Georgia, as Chavez did for Venezuela.
The US press is quick to condemn the racial hatred on display at Trump rallies. But I have yet to hear or read in the US press what our eyes can see in the three photos from Venezuela: an uprising of white people wanting to “take back their country.”
And take note: The Venezuela putsch by the wealthy, internationally connected minority is operating by a regime-change plan designed by neo-con re-tread John Bolton, Trump’s national security adviser. And take further note: It is a plan to control Venezuela and its oil, as Bolton proudly proclaims in the open.
Ah, yes, the oil. It’s always the oil. And Venezuela has plenty to seize: the world’s largest reserves.
We’ll get to that in Part II.
Note: Greg Palast covered Venezuela during the Chavez presidency for BBC Television Newsnight and The Guardian. Download the film of Palast’s BBC reports, The Assassination of Hugo Chavez, for FREE or with a donation to the Palast Investigative Fund. This article incorporates additional reporting by William Camacaro in Caracas.
Posted by LJansen at 12:40 PM 0 comments

Democrats Plans To Water Down Med4All--@Jimmy_Dore

WikiLeaks published an excerpt from what it titled the “U.S. coup manual,” which describes how the U.S. uses “financial weapons” to wage “economic warfare.” These documents describe how sanctions and other punitive economic policies are not a mere prelude to war; they are a form of war. As Norton writes, the U.S. is not considering war, but has “already been waging a war, for years.”
Even under this tremendous economic war, which worsened with a drop in oil prices, the Maduro government has focused on uplifting people. Telesur describes gains made under Maduro’s administration:
These gains do not make Venezuela a socialist economy, indeed Norway is more socialist than Venezuela. Venezuela remains a capitalist country with 70% of the economy in private businesses. Some on the left criticize Maduro for not moving the country more rapidly to institute a socialist economy. Why is Venezuela attacked and not Norway? Glen Ford of Black Agenda Report argues another reason they are targeted is racism. Another is that Venezuela has rejected U.S. domination.
The combination of tremendous drops in oil prices, the U.S. economic war and oligarch’s undermining the economy has resulted in the economy shrinking by 50% in five years – worse than the U.S. depression.
This week, John Bolton offered to send humanitarian assistance at the request of Guaido. When Venezuela has tried to buy essential goods and pharmaceuticals, they have been blocked and offered humanitarian aid instead. This presents a problem because if Venezuela accepts humanitarian aid, then it would provide an excuse for the Organization of American States (OAS) to intervene. And it would allow U.S. institutions such as USAID into the country to bring the aid.

https://youtu.be/nax1RWDAXOM
Posted by LJansen at 11:48 AM 0 comments